A mysterious alien weapon belonged to Alien Desimo along with Guwam. Desimonia was used strictly as the last line of defense to stop Ultraman Tiga and GUTS from stopping a global conspiracy that would grant total power to the aliens of Planet Desimonia. After a short battle the larger weapon merged with the smaller swarm to grow armor over it vital spot. With the arrival of Tiga's human allies, the alien weapon attempted to escape the confines of the Earth Atmosphere and leave for space. Ultraman Tiga and GUTS pursued the techno-organic weapons into space, there, their combined beams destroyed it once and for all. To the Southern Limit

Despite this, one Smaller Desimonia survived and served its master, Alien Desimo where it participated in Rena Yanase's kidnapping for it to became the alien's new body and it combined with Guwam to pilot it before Tiga sliced it to retrieve Rena. The Sleeping Maiden 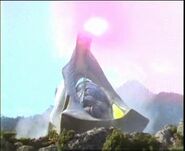 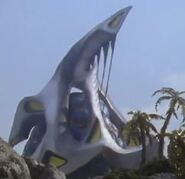