Ultraman Taro episode 10 "The Fang Cross Is a Monster's Grave!"

None
Depparas[1] (デッパラス Depparasu) is a walrus Kaiju from the Arctic that grew in size and traveled underground. He first appeared in episode 10 of Ultraman Taro.

A powerful walrus monster from the Arctic, Depparas grew to a great size, and traveled beneath the ground in an underground tunnel system. He soon found a way out, and arrived in Japan. There, he started feeding on Tomato Ketchup and other food items in a Japanese city.

When ZAT was called in, they unleashed all their firepower on the Kaiju with no effect. They then managed to use massive mirrors to draw the creature back to the pit it came from and then fired all of their weapons at it, successfully blowing it to smithereens, leaving little more than bloody chunks! Despite being blown to pieces, Depparas returned. Its body reformed and it attacked with a vengeance!

Now Re-Depparas appeared near the ZAT base and used its flame breath to cause chaos in the city of Ginza. With ZAT being called back to base late after watching Kotaro's boxing match, Re-Depparas used its horn to damage the ZAT base causing the base to go for a emergency takeoff and hurting Depperas. After being driven off, Depparas was confronted by Ultraman Taro. The walrus-like monster managed to impale its foe with one of its tusks, and yet Ultraman Taroh wouldn’t give. He beat the rampaging creature down and then unleashed the Strium Beam, once again blowing Depparas to pieces, but this time there would be no return. Taro then marked the monster's grave with its tusks in the shape of a cross.

Although not physically appearing, Depparas is one of the hibernating monsters awakened when Genegarg crashed on Earth. It is located in the Arctic. A Warrior's Principle

Re-Depparas
Re-Depparas (再生デッパラス Saisei Depparasu) is a revived variant of Depparas. However, the damage that caused him to be broken apart in its previous form remains, meaning that he is heavily mutilated.

Figure of Depparas, by Bullmark. 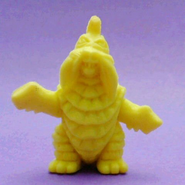 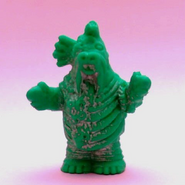 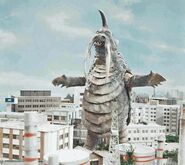 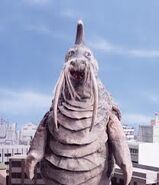 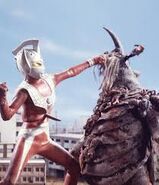 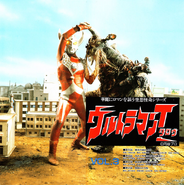 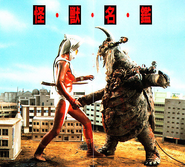