Ultraman Leo episode 42 "Terror of the Saucer Race Series - Leo Is in Danger! The Assassin Is a Flying Saucer"

After Absorba was killed by Leo, Black Directive called upon his fourth Saucer Kaiju, the blooding-sucking Demos. The monster quickly surged through space from its home planet and headed to Earth. It soon transformed into its small form, then immediately ambushed two people and drained them of their blood.

The vampire monster continued its evil search for fresh blood throughout the night, leaving the police department wondering about the cause. Knowing Gen was a former MAC member, the police contacted him with the rash of deaths. Knowing it had to be another one of Black Directive's pets, he arrived to help with the search, not knowing that the vampire monster was still lurking in the area, in fact, hiding inside the very building said investigation was taking place in.

Meanwhile,the hero was confronted by a mysterious man telling him of a creature named "Demos" but the man refused to explain much at all and tried to flee. When Gen caught up to the man, he had no memory of the event at all. He realized this man was somehow controlled by Black Directive and learned something shocking: he knew Gen's true identity.

Later, after being attacked by the police, Demos and its scouts reformed into its true form. Demos killed several police with its acid, then attacked the city. When Gen transformed Ultraman Leo to face the beast, it was consuming a skyscraper. After Leo saved the remnants of the skyscraper, the enraged monster attacked him, but the was too fast. He grabbed the monster, throwing it at the ground and pummeling it.

While Demos managed to grab Leo by the neck and throw him off, he was ultimately no match for the hero. Leo, out of range of the beast's acid, stunned it with the Leo Flash then leapt into the air and blew Demos up with his Dark Shooter. Even though Demos' parts were still alive and tried to escape, they were already ablaze and burned to death, ending the terror of the vampire monster forever. With Demos' death, Gen was able to return to his friends. 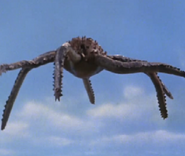 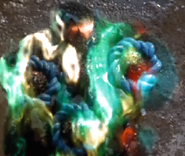 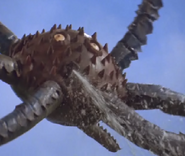 Demos Q (デモス Q Demosu Q) were Demos' small saucer minions that were sent to feed on human blood. Three appeared hiding in a kid's bedroom, a toy shop, and a sandpit park. One of them is the Master Demos (マスターデモス Masutā Demosu) that controls all units. 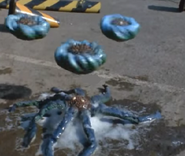 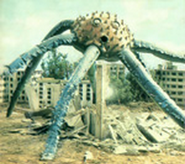 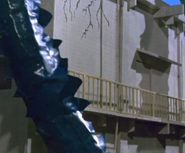 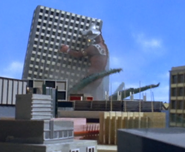 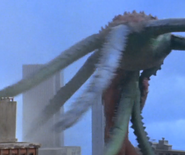 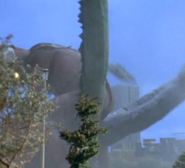 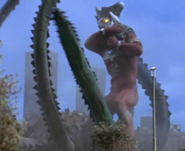 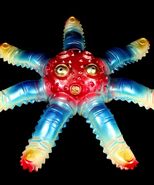 Figure of Demos, by Bear Model