None
Demagorg (デマゴーグ Demagogu) is a Kaiju from the TV series, Ultraman Dyna. He appeared in episode 27.

His name is a play of the English word, Demagogue.

Demagorg is a video game monster created by a boy and is secretly controlled by the Alien Chern. The Chern made a video game called "Giant Monster Coliseum" which features Demegorg as one of the characters another can create. The Chern then used children as test subjects as part of their plan to use one of the Children-Made monsters to destroy Earth by having them play and win matches. The boy who created Demagorg eventually won the tournament (with his last foe being Grossyna II), and the aliens gave him the grand prize of the win: the second version of the game, where he finds out that Dyna has been added as an enemy. Using Demagorg, he beats Dyna as well as the game, making Chern's test a success and Demagorg was unleashed into the real world and is under the boy's oblivious control, as he is wearing a headphone attachment to the game that is actually controlling his brain and forced him to do some actions. Super GUTS tried to attack Demagorg but the monster's adaptation to attacks proved their efforts futile. Asuka transformed into Ultraman Dyna and tried to fight, but thanks to the boy's gaming skills, Demagorg was now completely adapted to Dyna's powers. With the fight one-sided, Demagorg continued his onslaught on Dyna, stabbing him a few times with his tail and making Dyna's Color Timer blink.

Just as Demagorg is about to finish off Dyna, Super GUTS finds the video game and destroys it. This causes Demagorg to malfunction, no longer under the control of anyone. Berserk, Demagorg slammed into his creators' headquarters, killing them and unintentionally rendering Demagorg completely powerless. With the opportunity, Dyna goes into Miracle Type and fires the Revolium Wave at Demagorg, striking him in the chest and sending him to another dimension. 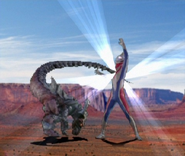 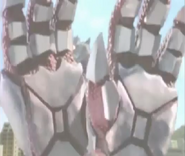 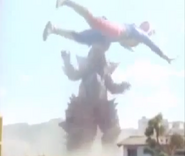 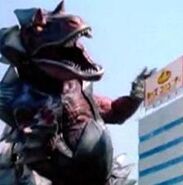 Demagorg about to destroy the Chern Headquarters

Demagorg causes something to explode