"When the heavens fill with the lights of sorcery the violent god who scorches the land, Demaaga, awakens. He sets the lands of the Pacific ablaze."

―Demaaga in Japanese-Pacific records, A Voice From the Starry Sky.

Demaaga (デマーガ Demāga)[1][2] is a Kaiju that debuted in the series Ultraman X, episode 1 "A Voice From the Starry Sky".

Eight centuries prior, Demaaga was an iron clad demon that once rampaged in Japan. He was defeated and sealed away by a Giant of Light.

In the present day, Demaaga reawakened in the countryside, specifically Area S2.5, causing the river to boil and the volcano to erupt and explode when he officially appeared. It shot out fireballs that hit both the country and city areas. Xio (Xeno invasion outcutters) tried to attack the monster's head with their weapons, believing to be its heat source, but Demaaga's iron hide made it impossible. Demaaga then rampaged in Umezawa City and damaged most of it. When Daichi Oozora went back to the ruins to salvage his precious Gomora Spark Doll, Demaaga attacked him, but then, a strange light appeared, protected him, and became one with him, much to Daichi's shock.

Demaaga attacked Ultraman X and at first, the Ultraman had the advantage due to Daichi's training, but soon Demaaga gained the upper hand and then tried to finish off Asuna Yamase, but X rushed in to save her. After that, Daichi finally gained the courage to face Demaaga head on and fought in an epic brawl with the iron and heat monster with the people cheering him on. Eventually X's Color Timer went off and that put Daichi in trouble. Thankfully, Xio reappeared on the scene and attacked Demaaga when he pinned down X to save him. X then defeated Demaaga once and for all by firing the Xanadium Beam. In the aftermath, Demaaga was turned into a Spark Doll and Daichi added him to Xio's collection. A Voice From the Starry Sky

When a second Demaaga awakened, the first one's Spark Doll fidgeting out of fear during one of its brethren's arrival. End of the Rainbow

A second Demaaga slumbered inside a cave until Gina Spectre reawakened it with her own power. This Demaaga marched towards Umezawa city, also known as area S2-7, and rampaged in that city until Ultraman X appeared and used his prowess in the Cyber Bemstar and Cyber Zetton Cyber Armor to take care of it.

However, the mysterious Dark Thunder Energy from space appeared and empowered Demaaga into Tsurugi Demaaga (ツルギデマーガ Tsurugi Demāga), growing blades underneath its arms and shoulders. This form of Demaaga had overwhelming power, and Ultraman X and Xio struggled to defeat him. In a last effort, X separated himself from Daichi to save his host, and ultimately made himself lost in cyberspace. Satisfied, Tsurugi Demaaga burrowed itself out.

It reappeared again in Umezawa city to resume it's attack as it fended itself off against the Xio mechas. X then re-emerged in time thanks to Daichi's use of the Xlugger to transform into his new form, Exceed X, cleansing Demaaga from the dark energy after an overwhelming fight and reduced it back to its original form before being turned to a Spark Doll by the Xanadium Beam. The Spark Doll was later recovered by Xio. End of the Rainbow

In the final episode of Ultraman X, after Greeza destroyed the Xio base, a Demaaga forcefully awakened in his Tsurugi form alongside EX Red King and EX Gomora, but he was eventually absorbed after being turned back into a Spark Doll by Greeza and the alien copied Demaaga's Fireball Eruption as a result. After speaking out to Gomora and striking Greeza right in the center of his chest, both Demaagas, along with all of the other Spark Dolls, traveled to X and united with him. Cyber Demaaga and Cyber Tsurugi Demaaga's power was used to help form the Hybrid armor and power up the Ultimate Xanadium to defeat Greeza once and for all. After Greeza was defeated once and for all, Demaaga, along with the numerous other Cyber Cards and Spark Dolls appeared and thanked Daichi as he thanked them. The Rainbow Land

Tsurugi Demaaga appeared as one of Zaigorg's army of Gorg monsters.

In the film, Zaigorg summoned multiple Tsurugi Demaagas across the planet, meant to ravage major citiies around Earth. With X, Ultraman, and Tiga in Japan, there was seemingly nothing to stop the monster as they landed to their destination using missile-like fireballs. Fortunately, Ultras that X had met previously appeared to combat each one in different places around the world: Ultraman Zero in Shanghai, China, Ultraman Max in Geneva, Switzerland, Ultraman Nexus in Cairo, Egypt, Ultraman Victory in Buenos Aires, Argentina, and Ultraman Ginga in Chicago, America.

The Demaagas were eventually destroyed when the Ultras received a power boost from Ultraman X in his Beta Spark Armor and unleashed their finishers (Wide Zero Shot, Maxium Cannon, Over-Ray Schtrom, Victorium Shoot, and Ginga Cross Shoot respectively) against them. Ultraman X The Movie: Here He Comes! Our Ultraman

Demaaga reappears in episode 24 of the series. Here, he, Gomess (S), and Telesdon, appear in the city, only to die to unknown circumstances as Orb arrives.

Demaaga appeared once again in episode 1 of the mini series when he fought Ultraman Orb in his Orb Origin form on Earth when Orb tried to stop him from rampaging any further. The Kaiju proved to be a capable fighter against the Ultra despite the latter having the upper hand in the fight. After Orb blocked his Heat Ray attack with the Orb Calibur, Orb decided to debut his newest form, Lightning Attacker, and no sooner after that, he blocked another Heat Ray from Demaaga and brushed it away. He then bombarded the Kaiju with electric-infused punches and kicks until he defeated it with his Attacker Ginga X only to realize that Demaaga was only a spirit which soon left the Earth and returned back to its resting place.

Coming from another dimension, Kamisori Demaaga (カミソリデマーガ Kamisori Demāga lit. Razor Demaaga) first appeared in the same portal as Mio Minato as she came through to get back to Earth, and it started wreaking havoc. Saki Mitsurugi transformed into Horoboros to fight it but was overwhelmed. Kamisori Demaaga then disappeared.

Later on, Kamisori Demaaga reappears to feed off the Ray Energy coursing through Earth. Since this disrupted her plan, Saki turned into Horoboros once more and the two Kaiju fought again, but Saki, still not having recovered, loses easily. Ultraman Rosso and Ultraman Blu fight Kamisori Demaaga in her place but found difficulty in dealing with it because of its tough armor and powerful attacks. They then fused into Ultraman Ruebe, who had a much easier time fighting Kamisori Demaaga, and the extradimensional monster was finally finished off by the Ruebium Beam. Extradimensional Mother

When the EGIS members get into a large brawl against several Alien Pedan and an Alien Ckalutch because of Alien Semon Meed, Kirisaki suddenly appears and kills a Pedan. To make things worse, he suddenly summons Demaaga just to force Hiroyuki Kudo to choose between saving his friends or the city. He transforms into Ultraman Taiga to fight Demaaga. After a short fight, Taiga throws Demaaga away to buy some time for him to change into Tri-Strium. Taiga proceeds to have a one-sided battle against Demaaga and finishes it off with the Taiga Blast Attack. Guardian Angel

Summoned by the Earth itself, Demaaga emerged from the underground alongside Gomess and Pagos as agents sent by the planet to destroy Ultroid Zero out of fear of the D4 weapon it possessed. The three monsters fought with Ultroid Zero before they were joined by Takkong and King Guesra. Ultraman Z also entered the battle but managed to drive off the latter two Kaiju back into the ocean. Under pressure from Director Kuriyama, who had been possessed by Celebro, Yoko Nakashima fired Ultroid Zero's D4 Ray at the three remaining Kaiju, obliterating them. Prelude to a Nightmare

Demaaga was reduced into a Spark Doll by Ultraman X's Xanadium Beam. Since then, it was kept under Xio's custody. Followed by Tsurugi Demaaga's defeat, Xio currently possesses two of these figures.

Tsurugi Demaaga is seen facing off against Ultraman Orb Lightning Attacker, in the opening of this series. Then seen again in episode 7, as Gai showcases Orb's Lighting Attacker form. 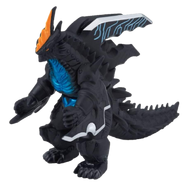