Ultraman: Towards the Future episode 1

No longer in use
The Delta-Plasma (デルタ・プラズマー Deruta Purazumā) is the pendant Jack Shindo wears and uses to become Ultraman Great in Ultraman: Towards the Future, as the series is called in English-speaking countries. It is shaped like Ultraman Great's Color Timer, or "warning light," and indeed, it becomes just that when Ultraman Great emerges.

After he rescued Jack from Gudis, Great chose Jack as his human host to survive on Earth and gave him the Delta-Plasma to transform into him and fight the monsters.

To use the Delta-Plasma, Jack gingerly places it in the palm of his left hand, closes his eyes, and concentrates. It then emits pulsating synthesizer noises and a light which transforms him. The "rise" scene for the transformation shows Ultraman Great emerging from amidst an explosion from a swirling galaxy. 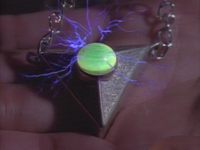 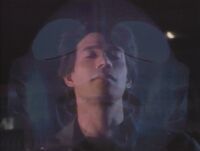 Jack closes his eyes as he concentrates

Great's rise
Add a photo to this gallery

A Tamashii Webshop exclusive, this Delta Plasma is a show-accurate life-sized replica of the transformation trinket, complete with die-cast body and a light-up gimmick. Like the rest of the keychain figures, the Delta Plasma pendant also comes with a single metal ball chain. However, you can change it into a necklace string if you wish.

Jack uses Delta-Plasma for the last time.
Add a photo to this gallery
Retrieved from "https://ultra.fandom.com/wiki/Delta-Plasma?oldid=510571"
Community content is available under CC-BY-SA unless otherwise noted.