"Delgoran was a friend of mine, until it suddenly changed and killed my father."

Delgoran is a monster whom had been researched by Sol and his father. They had been traveling through the galaxy together, but when they landed on an asteroid, Chaos Header quickly possesses the peaceful monster and killed Sol's father, along with their spaceship.

As the infected monster travels to Earth, Sol warns Team EYES, and they use the TECCH Booster to confront the beast. However, it suddenly teleports to the city before they can stop it. Musashi transforms into Cosmos and purifies Delgoran. Afterwards, the monster thanks him and flies back to space.

Flash Travel
Add a photo to this gallery
Chaos Delgoran 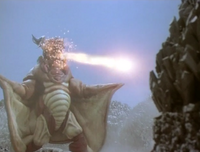 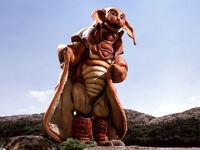 Retrieved from "https://ultra.fandom.com/wiki/Delgoran?oldid=510570"
Community content is available under CC-BY-SA unless otherwise noted.