Ultraman: Towards the Future episode 4 "The Storm Hunter"

None
Degunja (デガンジャ Deganja) was a Kaiju that appeared in episode 4 of Ultraman: Towards the Future.

One day, a couple of hunters were hunting kangaroos when a dust devil picked up their car and dropped it, killing one hunter and leaving the other in a shaken state. Since there wasn't a cloud in the sky, UMA suspected the Gudis virus. Jack and Lloyd tried looking in one of the taverns, hoping to find Mudjudi, a local Aborigine storm chaser, but the locals were uncooperative. Just as they were about to leave, the tornado appeared again. After it vanished, Mudjudi appeared and promised to help out, explaining that the tornado was in fact Degunja, the storm god. He insists that Degunja was angered by outsiders who had vandalized its resting place (presumably the Gudis-possessed Stanley), but that it is also behaving unnaturally, likely because it is infected with the Gudis. That night, an odd low-pressure system formed, making the UMA send Charles and Jean to investigate. The next day, the dust devil reappeared and was heading for Jack and Lloyd. A circle of stones was arranged by Jack and Mudjudi, the latter insisting that he alone must put the Degunja to rest: the ritual worked, and the tornado stopped in its tracks. However, UMA Hummers appeared and shot at it, causing Degunja to take an aggressive physical form. Degunja proceeded to attack the Hummers until Jack turned into Ultraman Great. Degunja, however, had the upper hand and kept deflecting Ultraman Great's beams and shooting him down with his own. Ultraman Great would not give up and absorbed some of the beams Degunja fired and used the Energy Beam to purify him of the Gudis virus and destroy him, returning peace to the outback.

Now again because the series was made in the 90s. Ultraman Great figures were made by Bandai, are more considerably rare figure than the Dreamworks line. 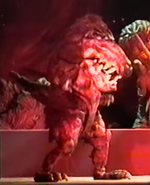 The deteriorated Degunja suit on display. Photo courtesy of shigtaisa at Twitter: https://twitter.com/shigtaisa/status/1258557904103198720
Community content is available under CC-BY-SA unless otherwise noted.
Advertisement