While mining a train tunnel between Tokyo & Osaka, a construction crew unearths a strange object from within a huge underground cavern. Unable to identify the object, Jun and Yuriko venture into the tunnel to further investigate. In the meantime, Ippei and a reporter, with the help of a young boy named Liro, discover that the object is the egg of the giant bird called Litra. According to ancient legend, when Litra's egg is found, the giant monster Gomess will appear to destroy the Earth and consequently, Litra will rise up to defend against it. Unfortunately, Jun and Yuriko have already encountered Gomess while exploring in the caverns and are pursue, to the surface by the ferocious monster. Jiri and Ippei help to warm the egg, thereby accelerating the hatching process and soon Litra is born. Gomess emerges from the tunnel and the two monsters clash in battle After a vicious struggle, Litra uses its citronella acid ray to kill Gomess and then expires itself, having fulfilled its destiny. 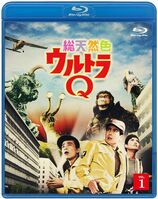