One night, a strange phenomenon appeared as a city was showered with green rain. Later, at a Hayami City industrial site, the raindrops fused with artificially made human organs that had been illegally dumped, giving birth to the Kaiju Deents. There, it went on a "killing" spree, liquefying humans for their energy but keeping them alive. One day, while a KCB crew was patrolling Hayami City due to the recent news of green rain, they stopped at an abandoned industry and found a human-shaped puddle. At the same time at Aerial Base, Gamu was conducting a research on the green raindrops. At night, a drunk man stumbled upon Deents where he was liquefied, alerting the KCB to the threat. However, they were quickly surrounded by multiple Deents. Thankfully, XIG and GUARD personnel appeared and defeated the creatures. later, Gamu conducted an experiment on one of the liquefied victims, causing it to plead for help, revealing that they were still alive. Gamu took a sample and brought it to a nearby hospital for study. The doctor was suprised and felt remorse, as he revealed that it was the celsl of his failed artificial human organs that had created the Deents. Tsutsumi lead a squad of GUARD personnel and launched an attack on the Mother Deents, their Queen.

The Queen became enraged, growing to giant size. Ultraman Gaia appeared and battled the Mother Deents but she quickly overpowered him, to the point where his legs were temporarily liquefied. The doctor later called Reiko to inform her that the Mother Deents' essence can be used to turn the liquefied victims into normal. Reiko told this to Gaia, who lifted the Mother Deents into the sky, destroying her and raining her essence across the city, healing the victims of the Deents. 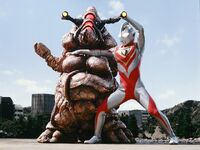 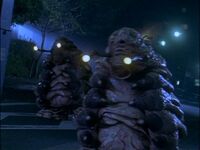