Deavorick (デアボリック Deaborikku), also known as Darebolic[1], is a Kaiju that first appeared in Ultraman Orb The Movie: Lend Me The Power of Bonds!.

Deavorick was created by Mulnau via her Dark Ring, which she used to cause mayhem and chaos throughout the city and then turn all of it into a jewel and kept doing so until Ultraman Orb in his Spacium Zeperion form and Ultraman X showed up to fight him. During their first fight, Deavorick unleashed all of his weaponry on the Ultras, they defended themselves with the Sperion Shield then deflected them. While the kaiju held his own against the two, Orb and X ultimately held the upper hand against Deavorick with their teamwork in combat and agility and would have destroyed him with their Sperion Ray and Xanadium Ray respectively if Alien Gapiya Sadeath had not stepped in and interfered. Deavorick then overpowered and defeated X while Sadeath kept Orb while the latter was in his Thunder Breastar form. Deavorick then prepared to turn Ultraman Orb into a jewel, but X took the attack for him and got turned into a jewel in the process.

Deavorick then continued his rampage alongside Sadeath, but they would soon confront Ultraman Orb again, only this time in his new Orb Trinity form. After he seemingly destroyed Sedeath with his Trinitium Break, Deavorick would have had to fight Orb on his own, but Mulnau sent Alien Temperor Batista and Alien Hipporito Callisto to help out the kaiju. All three of them gave Orb a hard time in combat even though Orb did his best, but then Zeppandon showed up, this time to help out the Ultraman. While the aliens were being dealt with, Orb struck a major blow at Deavorick with his Trinitium Straight, but he soon recovered and joined Batista and Callisto in ganging up and beating up Orb.

Just as things seemed bleak, Jugglus Juggler used his powers to cast away the Dark Ring, which resulted in the Ultra Warriors Ginga, Victory, and X being freed from being space jewels after they unleashed energy blasts at the trio. After being joined by Alien Guts Doppel, the alien army launched their attacks on the Ultras, who deflected and dodged the attacks and Deavorick went back to fighting Orb. As the fight raged on, the two giants were evenly matched with each other in terms of combat and techniques.

Later on, Sadeath restored himself and targeted Orb with Deavorick's built-in cannon, and managed to defeat him again even when Orb his Trinitium Shield to protect himself from the attack until Ultraseven arrived and used his Eye Slugger to power through the attack and separated Seadeath and Deavorick's docking. While Seven dealt with the Gapiya, Orb struck Deavorick with his EX Red King Knuckle and Gomora Armor claw gauntlet, both of which dealt effective strikes. Orb then fired his Trinitium Shoot at Deavorick and Sadeath, but they deflected the attack and threw it away, only for the attack to shoot down Mulnau's floating castle, resulting in it crashing and burning to the ground, with her in it.

Deavorick then decided to fight Ultraseven but was proven to be no match for him due to his expertise and experience in combat. Eventually, the two decided to use the Final Boost Charge one last time, only for it to be overwhelmed by the Trinitium Light Ring and had the two of them sliced in half, putting an end to both of them for good.

Deavorick returns as Deavorick (MB) (デアボリック(MB) Deaborikku (Emu Bī)), a monster sealed inside a bomb. Should it explode, Deavorick would be released. It was acquired by Alien Zetton Zolin of the Villain Guild from Alien Markind to sell it off for money. The Villain Guild made a video recording that the police somehow got a hold of, to ransom the public into depositing 10 million dollars into their account or the bomb explodes. Just three hours before the scheduled explosion, the police had Inspector Sakura hand it over to EGIS to deal with it, dispatching Homare Soya and Hiroyuki Kudo for the job. Homare finds out from the Fanton that it had been stolen during transportation.

The monster bomb was set up in a city, where it emerged from an explosion that destroyed the building Hiroyuki and Homare were in after being captured. Breaking free of the chains that bound him to a chair, Hiroyuki transformed into Ultraman Taiga to do battle, but he was overwhelmed. Volk, a figure from Homare's past who joined and then betrayed the Villain Guild, gives Homare a pendant that contained the light of Ultraman Fuma, who then appears and swaps with Taiga. Fuma's speed gave him the advantage over Deavorick and easily dealt with the monster using numerous energy attacks, and finally putting an end to the battle by using the Ginga-let's Seven Stars Light Wave Shuriken.

Explosion Summon
Add a photo to this gallery 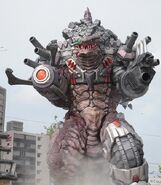 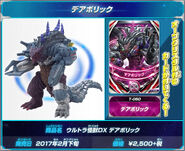 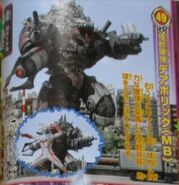 Retrieved from "https://ultra.fandom.com/wiki/Deavorick?oldid=445430"
Community content is available under CC-BY-SA unless otherwise noted.