Ultraman Dyna episode 46 "The Power of Thinking of You"
Deathfacer (デスフェイサー Desufeisā) was a robot servant of the Alien Monera. Originally a TPC battleship Prometheus (プロメテウス Porumeteusu), it was manipulated by the said aliens to become their ultimate weapon.

A huge robotic weapon created by TPC as the Prometheus battleship, the robot revealed itself back on base after being "mollusionized" by the Monera Aliens. When challenged by Ultraman Dyna, the robot dominated the hero, blocking his attacks and decimating the area with its Gatling gun. After the hero turned into his Miracle Type and its attacks were reflected due to the machine's shield, Deathfacer drifted into the sky and prepared to fire the Neo Maxima Cannon! Dyna managed to escape the blast, but the whole island was reduced to a smoldering crater.

Not long after, Deathfacer was unleashed on Japan. Super GUTS attacked it with little effect. One of the crafts was lodged in a skyscraper. The machine prepared to fire an energy beam, but just before it could get a direct hit, Asuka called on Ultraman Dyna for the rematch.

The hero arrived in his Strong Type and lifted the alien war machine up. The robot still managed to fight back, matching Dyna's strength to its fullest. After its other attacks failed, Deathfacer tried to use the Neo Maxima Cannon. Before he could fire again, Dyna thrust his hand right through its body! Stunned and half-destroyed, the powerful robot was helpless as he was hoisted into the air and thrown into the sky where its body exploded from the damage it sustained.

Deathfacer was an hallucination experienced by the Super GUTS members to appear before morphing into Evil Tiga and later Moravia.

Flight
Add a photo to this gallery
Deathfacer 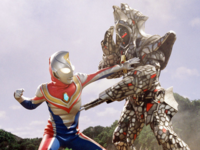 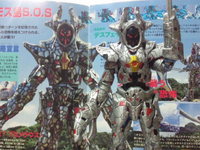 Add a photo to this gallery
Retrieved from "https://ultra.fandom.com/wiki/Deathfacer?oldid=535217"
Community content is available under CC-BY-SA unless otherwise noted.