Deathdrago's existence (as well as three other monsters) was dated as early as 30 million years prior to the series, whose presence had been documented in the ancient ruins of several foreign countries. The Wings of That Day Akito speculated that their rampaging spree in the past was due to the Eternity Core's influence. Wavering Heart Six years prior to the series, Deathdrago was the first recorded monster to appear. It fled after its right horn was severed by the GUTS Wing (piloted by Mitsukuni Shizuma no less), but not without killing Akito's parents. Its presence managed to validate Mitsukuni's claim of monster appearances, thus leading to the formation of TPU and GUTS-Select.

In the present day, Deathdrago awakened and fought Trigger to a standstill. After retreating to the underground, it was empowered and brainwashed by Carmeara into a Dark Monster. Deathdrago returned to the surface to fight Trigger while Darrgon was busy chasing Yuna Shizuma and Akito Hijiri. It was defeated by Trigger Sky Type's Runboldt Arrow Strike via the Circle Arms' Sky Arrow. Akito's Promise

Genegarg and Deathdrago emerged from the ground just after Ultraman Trigger fought against Gazort. He was being overwhelmed by the two of them until Ultraman Z Gamma Future appeared. However, even with the two of them, they were still defeated by the two monsters' brute strength. Akito Hijiri and Yuna Shizuma manage to locate Trigger's lost Power Type GUTS Hyper Key and return it to him, allowing Trigger to change to Power Type while Z changed to Beta Smash. They wrestled against the two monsters and destroyed the both of them with the Zestium Beam and Deracium Beam Torrent respectively. Ultraman Trigger: Episode Z 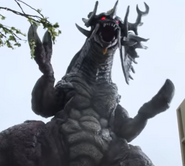 Deathdrago's antler about to break 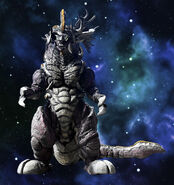 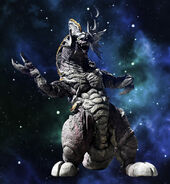