"Humankind has over-evolved! That itself is leading the universe to destruction"

Ultraman Gaia episode 48 "The Revenge of the Death God"
The Deathbringer (死神 Shinigami)[2] was an alien that appeared in the series Ultraman Gaia. He is the messenger of the Radical Destruction Bringer. His true form is Zebubu (ゼブブ Zebubu)[1].

The title "Shinigami" is a Japanese equivalent of the Grim Reaper.

Zebubu's name is derived "Beelzebub", a name for Satan and/or a Philistine god in the Old Testament. The Bezelb would later be named similarly.

The Deathbringer is based on the Buddha and the Japanese death god.

Zebubu is based on an owl which are said in legend to be bad omens and Death's bird.

On Earth, the Deathbringer transformed into Zebubu and fought Agul. Zebubu cut Agul's hip open with his blade and gravely injured him. Ultraman Gaia arrived and healed Agul, who then turned back to Fujimiya. Zebubu launched attacks on Gaia and XIG. A fierce fight ensued and Zebubu lost one of its horns and eye in the process. Gaia transformed into Supreme Version and used the Photon Stream to defeat him. With the Deathbringer gone, the final phase of the invasion commenced.The Revenge of the Death God 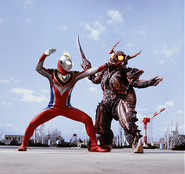