Fireman episode 22 "It has Arrived!! The Transformed Alien"

None
Death Torosaurus (デストロサウルス Desutorosaurusu) is one of the many monsters to appear in the series, Fireman.

Death Torosaurus was said to be a species of dinosaur when it appeared. Fireman came in and fought the monster. After being wounded, Destrosaurous disappeared back into the ocean and was thought to be gone for good. When Destrosaurous came back again Fireman came back and was ready for round two, this time with a plan. Fireman soon wounded Destrosaurous again finished him off, ending the fight for good. 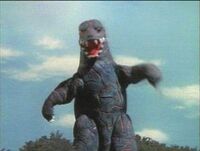 Add a photo to this gallery
Retrieved from "https://ultra.fandom.com/wiki/Death_Torosaurus?oldid=510558"
Community content is available under CC-BY-SA unless otherwise noted.