None
Dead King (デッドキング Deddo Kingu) is the last Kaiju to fight Mirrorman in his series.

Four days before Planet X would collide with Earth the anti-gravity apparatus was going under repairs from Eletrikzaurus's attack. Five invaders ambushed Kyotaro and Asako in a building before one of their space ships appeared in Tokyo. The five Invaders grouped together and a green beam from the space ship hit them, turning them into the monster Dead King who quickly destroyed the building. Kyotaro used a bathroom mirror to become Mirrorman with Asako witnessing what had happened. Mirrorman kicked Dead King down on top of a double decker highway. Once the monster got up both of them were unable to gain the upper hand on the other. Mirrorman led Dead King to a field where he quickly lit it on fire with his mouth flames. After the hero threw him DeadKing quickly burrowed underground. Dead King would then team up with Eletrikzaurus to attack the repaired apparatus when Planet X was about to collide with Earth in the next three hours. Both monsters were quickly knocked down by a missile barrage from the Jumbo Phoenix although the Invader armada arrived immediately after. As SGM was distracted, both Dead King and Eletrikzaurus continued toward the apparatus only for Mirrorman to attack them in his final battle. Eletrikzaurus was shoved back and Dead King was grabbed by his tail and thrown into him. Eletrikzaurus held Mirrorman in place with his claws so Dead King could bash him with his tail only for SGM to knock him down with more missiles. After Mirrorman destroyed Eletrikzaurus, Dead King was quickly assaulted once he got up. Dead King used his mouth flames which the hero countered with the Mirror Knife into the monster's maw. Dead King was quickly destroyed with the Silver Cross just as Mirrorman ran out of energy. 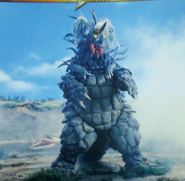