Ultraman 80 episode 18 "Flight to the Eerie Monster Island Part 2"
Daron (ダロン, Daron) is a Kaiju that appeared in Ultraman 80. He appeared in episodes 17 and 18.

One of Gymaira's slaves, Daron rose up from the water to attack UGM after Lavras's identity was discovered. UGM tried to fight Daron with their guns but did nothing as he shrugged away two members to kill Takeshi. Luckily, Takeshi transformed into Ultraman 80 to fight the monster. With the assistance of Lavras (whom was being controlled by Gymaira,) both monsters double-teamed Ultraman 80 and Daron managed to ensnare 80 with one of his tentacles and electrocute him and let Lavras finish him. However it’s revealed that Lavras has regain his conscience as human and charging at Daron instead, released 80 in process. Angry at Lavras for attacking him, Daron attacked and brutalized his partner. Seeing the opportunity 80 then threw the Ultra Ray Lance at his head, causing him to dissolve into nothing. 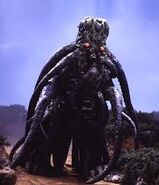 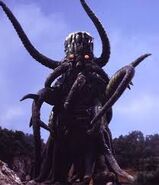 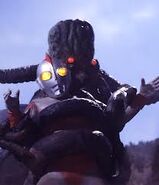 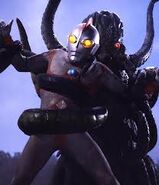 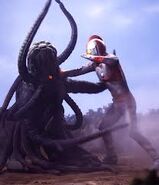 Figure of Daron, by MARRS. 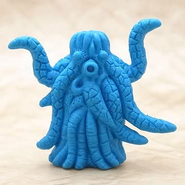 A Daron eraser
Community content is available under CC-BY-SA unless otherwise noted.
Advertisement