Darkness and Light (闇と光 Yami to hikari) is the tenth episode of Ultraman Ginga.

Continuing from where the previous episode left off, Hikaru thinks about how Misuzu would have felt about her father's actions. He and his friends were then called to a corridor with Seiichiro and the others, where a signboard with the school's virtues written on it is badly damaged. Principal Kyoko Shirai appears to be distraught over this as Hotsuma Raido comforts her.

Super Grand King suddenly appears and Hikaru and Tomoya intercept it with Ultraman Ginga and Jean-Nine respectively. They struggle to hold it back before realizing the person controlling the cyborg were Alien Nackle and more shockingly, Misuzu Isurugi. Ginga suggests to Hikaru that the best way to save Misuzu is to go and talk directly to her. WIth that, Hikaru uses a ability that transfers him into the mind of Misuzu, the environment of which is a warped version of the school's exterior grounds.

While all this is happening, Ginga is rendered motionless and Jean-Nine has to hold back Super Grand King all by himself. Kenta and Chigusa, with Seiichiro, are worried by the situation. Ultraman Taro appeared and revealed that Misuzu is within Super Grand King, with the darkness in her heart manipulated by Nackle. He even explains that Hikaru is risking his life in an effort to save Misuzu. Seiichiro decides to save Misuzu by himself in an attempt to redeem for his misdeeds, but Kenta and Chigusa state their resolve to aid their friend too. Suddenly, the Ginga Shrine symbol flashes and to Taro's surprise; the three of them receive Ginga Light Sparks. Kenta picks Ultraman Tiga, Chigusa Ultraman, and Seiichiro Ultraseven as they Ultlive to assist Jean-Nine.

Meanwhile, Hotsuma leads Principal Kyoko to apparently what used to be her room. It is in an utter mess. He confronts Kyoko about the darkness about her, and pulls back the curtains in the room to reveal the remaining Spark Dolls, much to Kyoko's shock. She then sees the various newspapers articles highlighting the problems with Furoboshi Elementary School. Hotsuma jogs her memory and she remembers that in a trance, she was the one that destroyed the signboard, and that she also picked up the Dark Spark when the first Ginga Shrine burnt down, allowing Dark Lugiel to take control of her.

Back to the fight, Seven, Tiga and Ultraman are running out of power faster than expected, and soon Super Grand King defeats them. A worried Tomoya asks Hikaru to hurry due to the extent of damage Jean-Nine has received.

Kyoko starts to lose control as Hotsuma tries to force the Dark Spark out of her, her arms becoming those of Dark Lugiel's.

As Ginga's Color Timer began to flash red, causing the Ultra to fell weak from losing power and Jean-Nine is about to be done for as well, Hikaru finally gets through to Misuzu and they both go back to Ginga. With his Color Timer then went back to full power, the Ultraman then defeats Super Grand King and Alien Nackle with his Ginga Sunshine.

Finally, Hotsuma manages to purge Kyoko of the darkness, leaving both of them exhausted. 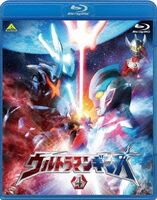 Blu-Ray Cover
Add a photo to this gallery
Retrieved from "https://ultra.fandom.com/wiki/Darkness_and_Light?oldid=510545"
Community content is available under CC-BY-SA unless otherwise noted.