Darkness Five (ダークネスファイブ Dākunesu Faibu) are a group of evil aliens bent on annihilating the Ultimate Force Zero. Members are homologs of aliens that plagued the Ultra warriors in the past, only that all of their eyes are red.

The Darkness Five is formed by a group of aliens, namely Villainous, Deathrog, Glocken, Surai and Jathar and with Ultraman Belial as their master and plans to eliminate the members of the Ultimate Force Zero.

Prior to the series, all members of the Darkness Five participated in the Omega Armageddon alongside Kei, Belial and his new army, the Terror The Belial against the Ultra Warriors which held the fate of the universe at stake. Ultraman Geed 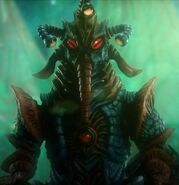 Jathar disguises himself as Mother of Ultra

Retrieved from "https://ultra.fandom.com/wiki/Darkness_Five?oldid=435862"
Community content is available under CC-BY-SA unless otherwise noted.