"Don't think it ends here. The countdown of fear and despair that shakes the universe has already begun. Soon, from our universe, a terror beyond imagining!"

―Darklops Zero's word before self destructing

Ultraman Geed episode 3 "Salaryman Zero"
Darklops Zero (ダークロプスゼロ Dākuropusu Zero) is a prototype model of the Darklops army that exists in an alternate universe before being thrown out of his home reality.

Darklops Zero's suit is a modification of an Ultraman Zero suit. In addition, his mono-eye is meant to remove any forms of facial expression.[1] His identity was remain hidden as Tector Gear Black in promotional items until his debut in the Gaiden. His popularity is also what leads to the creation of Darklops army in Ultraman Zero The Movie: Super Deciding Fight! The Belial Galactic Empire.[2]

An experimental prototype for Kaiser Belial's army, Darklops was used as a guinea pig for a universe crossing experiment. At the end of the experiment, he was left stranded and damaged as he floated aimlessly through another universe. The people of Salome in that universe modified him to obey their commands.

When the original Ultraman Zero was overpowering Mecha Gomora, Alien Salome Herodia unleashed the robot to defeat Zero; while equipping him with Tector Gear Black to make sure it wouldn't go berserk. However after a short brawl with Zero, Darklops Zero destroyed the Tector Gear after gathering energy into its fist and striking the armor. No longer restrained, Darklops Zero faced the source of his design in a fight where they are nearly equal but with Darklops coming out victorious. Soon the Imitation Ultra Brothers (SR Team) arrived and Darklops fired a cannon of universal energy that sent them and Zero into a gap between reality.

"People just think too highly of themselves. Though you're just a small short-living creatures. Did you really think, you could control me? *laugh*"

After the fight, Darklops Zero was restrained so his energy could be charged for the universal transfer experiment, it was at that moment he began to remember Belial. After trying to send off a team of Imitation Ultra Brothers into another universe, Darklops Zero turned on Herodia, destroying the remaining Ultra Brothers and mocking her as she dropped to the ground from its hand. It walked out of the facility and called Mecha Gomora to help the fight with the original Gomora.

Ultraman Zero ultimately returns from the other dimensions and fights Darklops Zero again, with the former getting the advantage over him. In a last ditch effort, Darklops tried to use its Dimension Core again but Zero uses the Zero Twin Sword in a high speed dash to defeat it. Before powering down, Darklops mocked Zero about a countdown to despair and fear, referring to Belial's conquest. It then struck its fist into its chest to blow it and Planet Cheney up. Fortunately, Zero and Space Pendragon are sent back to their universe through the explosion.

"Darklops Zero, go and bring the end mark to him."

―Kei as he summons Darklops Zero. 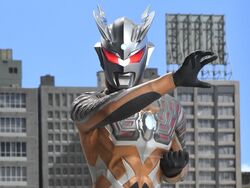 Darklops Zero returned in episode 3 of Ultraman Geed where he was seen fighting the titular character already in Ogawa. He dodged and blocked the Ultra's attacks until the latter punched the former in the Protectors, but Geed ended up exclaiming in pain due to how tough it was. Afterward, he kicked him away then fired his Darklops Matter at him, which was strong enough to make his Color Timer go off. He then decided to finish off the new Ultraman with his Sluggers, but then Ultraman Zero showed up and decided to fight him. Due to his experience with the prototype robot, Zero held his own against Darklops Zero, who eventually decided to retreat after his Darklops Zero Shot was overpowered by Zero's Wide Zero Shot.

Darklops Zero reappeared as he was revealed to be a Kaiju Capsule owned by Kei Fukuide, who then summoned him again with his Riser after he sensed Ultraman Zero's presence. Once again, Darklops was confronted by Geed and they began to fight each other again and even though Geed tried harder to get an advantage over the robot, he still had trouble with it and still found himself in pain. As if things weren't bad enough, Kei summoned two more Darklops Zeros to uneven the odds and to get Ultraman Zero out of hiding. They dealt serious blows to the Ultra one by one, giving him a really hard time. After being hit by the trio's Darklops Matters, Geed looked as though his time was up, but a kid named Toru Honda sacrificed his Little Star power within him to help Geed after encouraging him to get up and not give up. The Little Star revealed itself to be the Ultraseven Ultra Capsule. Riku Asakura used it, alongside Ultraman Leo's Ultra Capsule to Fusion Rise into his new Solid Burning form.

With his new powers, Geed was able to deal serious damage to the first Darklops Zero with a Boost Punch then overpowered it's Dimension Storm with his Solar Boost, destroying the first one in the process. As for the second one, Geed fought him with his new Geed Slugger in a Slugger match and eventually destroyed it with his Boost Slugger Kick. Geed then turned his attention towards the last one and after he blocked and dodged his attacks with ease, he destroyed it with his Strike Boost, ending the Darklops Zeros' threat on Earth. In the aftermath, Kei pointed out that the Darklops Zero Capsule was the third one he needed, with four left.

﻿In his regular appearance, Darklops Zero roughly has the same amount of power as Ultraman Zero, such as in speed and fighting style.

In this form Darklops Zero dons the Tector Gear Black (テクターギアブラック Tekutā Gia Burakku), and adopted the name of this armor to hide his true nature.