N/A
Drugs distributed by the Star of Darkness as part of their plan to take over Earth.

The chemicals have the affect of causing its human users to gain greater physical abilities, such superhuman strength and durability, along with causing distorted features like scaly skin, fangs, and glowing red eyes. Over indulgence causes the user to 'burn out' with smoke rising from the body as their strength fades. Often times the user will lose consciousness.

The drugs also have unknown side effects as it revived/healed Kotaro after he was stabbed and seemed to grant him permanent powers and combustive abilities. 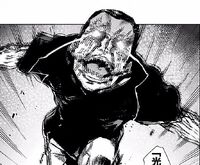 Retrieved from "https://ultra.fandom.com/wiki/Dark_Star_Drugs?oldid=510531"
Community content is available under CC-BY-SA unless otherwise noted.