All the Spark Dolls restored back to their original form after that defeat of Dark Lugiel
The Dark Spark War (ダークスパークウォーズ Dāku Supāku Uōzu) was a war that occured prior to the events of Ultraman Ginga.

The Dark Spark War was a conflict that raged between the sides of good and evil, as represented by the competitors, the Ultramen, monster and evil aliens seen in various universes. The war was multidimensional, with Ultras, monsters and evil aliens coming from various different universes.

The Ultras, monsters and aliens were matched in battle but during the midst of the battle an unknown dark figure turned them all into figures known as Spark Dolls (スパークドール Supāku Dōru) some of which fell to Earth in the area that came to be known as Starry City. In response to this the Ultraman known as Ginga, who had never been seen before, tried to stop him from seizing the power of the Spark Dolls. The battle was unseen, but it was clear that Ginga lost, but somehow his Spark Doll was hidden within the Ginga Spark and it fell to Earth, perhaps even taking the other Spark Dolls with it.

Of the Spark Dolls, most of the monsters and aliens remain in the dark figure's collection but one doll Taro, which was on Earth somehow maintained his sentience and limited use of his psychic abilities.

After Dark Lugiel's defeat, all of the Spark Dolls are presumed to be restored back to their original forms and departed home.

Ultras and Their Allies

Ultraman Tiga vs Golza while Ultraman Taro vs Alien Temperor

The Spark Dolls fell down as meteor shower 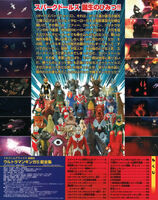 Retrieved from "https://ultra.fandom.com/wiki/Dark_Spark_War?oldid=522004"
Community content is available under CC-BY-SA unless otherwise noted.