In use, destroyed (formerly)
Unknown (currently)
The Dark Ring (ダークリング Dāku Ringu) is the dark counterpart of Ultraman Orb's Orb Ring, used by Jugglus Juggler and later on by Murnau. Being a dark variation, it is only used by individuals with darker hearts.

Chapter 3 " The Man Who Stole The Black Hole " arc

When Gai obtained the Orb Ring on the Crusader's Peak of Planet O-50, Juggler was jealous of Gai. Slamming his fists into the ground, the area was covered by a shadow from a ring of light, the Dark Ring appeared. Juggler took the ring, and chased Gai to Earth.

Juggler appears in Ishtal Civilization, posing as a figure to the religion named Magacizm, first used to Dark Ring to collect the Kaiju Card of Dodongo which Orb defeated earlier and later used it to summon Magatanothor and obtained its Kaiju Card after its defeat by Orb.

Chapter 5 "From Rulsaka With Love" arc

108 years later in 2016, he harvested Peguila's card in the North Artic to awaken Maga-Basser in Japan.

A device that was used by Jugglus Juggler as a counteract to the Orb Ring, he used it to awaken Lord Monsters and harvest their cards upon defeat by Ultraman Orb. Using the six Lord Monster cards, he summoned the egg of Maga-Orochi and used the card of Ultraman Belial to destroy Zoffy's cards and unleash the monster in its rampaging spree.

Following the monster's destruction, Juggler used the Dark Ring for the last time to create Zeppandon. After said combination the Dark Ring dissipated into a purple substance and vanished into thin air, further adding insult to his defeat.

"This thing...only falls into the most evil hearted creature."

The Dark Ring (either the original one or another similar device) ended up in Murnau's possession, and that helped her to turn everything she fancied upon into space jewels. Using this she also sealed up Ultra Warriors Ginga and Victory, and summoned Darebolic. The Dark Ring's fate is unknown when Juggler sent it into a wormhole with his katana. 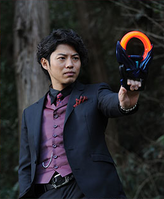 Murnau
Add a photo to this gallery

Kaiju Summoning (Murnau)
Add a photo to this gallery

Alien Magma with the Dark Ring. 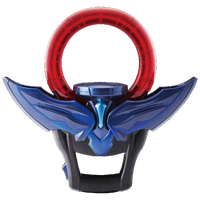 Retrieved from "https://ultra.fandom.com/wiki/Dark_Ring?oldid=528066"
Community content is available under CC-BY-SA unless otherwise noted.