"Your short life will soon burn out. With that light, I will suck it all up!"

Satoshi Yamamoto
Dark Mephisto (Zwei) (ダークメフィスト（ツヴァイ） Dāku Mefisuto (Tsuvai))[2][3] is a Dark Ultra Warrior that appeared in Ultraman Nexus. He was created as the successor of Dark Mephisto.

Like the first Mephisto, he is named after the German devil Mephistopheles. The "Zwei" suffix on his name refers to the digit number "2" in German, since he is the second Mephisto.

Despite his real name being Dark Mephisto (Zwei), he is only refered to as Dark Mephisto in the series, at the end, Zagi only mentions Faust and Mephisto, either not caring or grouping the two together.

"I was a manipulated human. Just like that Misawa guy. He (Unknown Hand) uses the darkness within the heart."

The exact origin of Dark Mephisto (Zwei) was unknown, but he possessed the Memory Police officer Hiroyuki Misawa during Mizorogi's attempt to escape captivity from the Freedom Fortress. At least according to Mizorogi in his last breath, the Unknown Hand (Dark Zagi) manipulated Misawa into a dark giant by corrupting his heart, exactly as how the original Mephisto did to the former Night Raider sub-captain before.

"You should already...have lost the ability to transform!"

Misawa exposed himself to Nagi and Komon by shooting his predecessor and transforms in order to take Mizorogi's place as the bringer of darkness. Even with Ultraman Nexus' intervention, the two giants are evenly matched in speed before Zwei pinned him to absorb his energies. The redeemed Shinya transformed into Dark Mephisto through sheer will and join the fight against his successor. Although it appeared that Zwei has the advantage again, Mephisto turn the tables by holding his duplicate while Nexus Junis Blue fired his Arrow-Ray Schtrom, reducing Zwei to light particles. Shadow - Unknown Hand -

Hiroyuki uses the Darkevolver, where he pulls the two ends of the device apart, and transforms into Dark Mephisto Zwei in a dark pillar.

Zwei's first and only transformation

Dark Mephisto (Zwei) appears in this game as one of the secret playable characters. To unlock him, the player must complete Battle Mode using Dark Mephisto.

Released as part of the Play Hero VS "Invasion! The Strongest Enemy" lineup, this Dark Mephisto Zwei is a small figure (about 8cm) and he sports 3 points of articulation and entirely casted in red plastic with black, silver and gold paint operations. He also comes with Ultraman Nexus Junis Blue.
Package images with Nexus & Dark Mephisto Zwei includes the said figures. 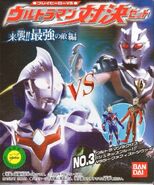 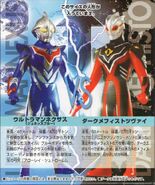 The Dark Mephisto Zwei figure is also available individually in a windowed bagged packaging outside Japan.

Released as part of the first "Ultraman: Giant of Light Collection" assortment for the MasColle line, this small head bust of Dark Mephisto (Zwei) features a light-up gimmick, activated by switch accessible by removing the head from the stand. Dark Mephisto Zwei features a glowing red color on his eyes, though the LED can be switched off to represent the original Dark Mephisto.