None
Dark Mander (ダークマンダー Dāku Mandā) is the final monster to fight Fireman in his series.

Another alien invasion had unfolded, S.A.F's headquarters was not even spared from the assault. Explosions covered the ground. The invaders monster, Dark Mander was unleashed. The weapons of humanity had no effect on the tyrant. Daisuke Misaki had survived the destruction of his S.A.F. jet, so he took quick action and turned into Fireman. The two fought, none being able to overpower the other, however, Fireman unleashed the devastating power of his Fire Dash, Fireman obliterated the monster, allowing him to soon put an end to the entire invasion. 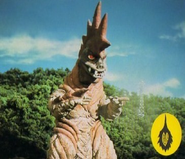 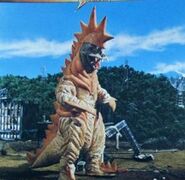