Somewhere in the future, separation from a single entity

Ultraman Ginga (Half of original form)

Unidentified
Dark Lugiel (ダークルギエル Dāku Rugieru) is the main antagonist of Ultraman Ginga. He and Ultraman Ginga were formerly one entity, but were separated after clashing between their point of view towards lifeforms.

" Both: Because of how limited a life is, everyone is afraid of the end, suffering, pains and mistakes are born.
Lugiel: Then, time (life) and happiness must be stopped in order to prevent more sadness and mistakes.
Ginga: Overcoming sadness and mistake is eternal so that future generations can inherit a better future.
(Lugiel parted and embraced darkness)
Ginga: This is where we parted ways."

Both Ultraman Ginga and Dark Lugiel originated from space set some time, somewhere in the future. The two were originally one entity however, both Ginga and Lugiel had different mindsets of peace. Lugiel stated that to create an "ultimate paradise", all lifeforms must be paused but Ginga objected, saying that all lifeforms bring prosperity. The two eventually split up with Ginga bearing the light and Lugiel bearing the darkness.

Lugiel appeared at the end of a great conflict between the Ultras and the forces of evil and using the Dark Spark, he committed the action that gave the conflict its name, the Dark Spark War, transforming every Ultra, Alien, Monster, and Terrible-Monster into a Spark Doll. Even the appearance of Ultraman Ginga and his Ginga Spark was not enough to stop him and the Ultra was also turned into a doll. However, Lugiel was also turned into a doll, locked inside his Spark Device, like the Ginga Spark and the Spark Doll he fell to Earth, taking a host.

Dark Lugiel had his subordinate Alien Valky search around the Earth with Dark Dummy Sparks and Monster/Alien Spark Dolls and give them to corrupt minded individuals. The reason for this is that the Dark Spark gains power from use of the Dark Dummy Sparks. The rest of the Spark Dolls were kept by him on shelves in a dark, eerie room (later revealed to be Kyoko Shirai's room in Furoboshi Elementary School.) Alien Valky also reports back to him from time to time, usually about Ultraman Ginga who he seems to fear and loathe, most likely due to their previous battle. His plan is unknown, but he has commented that 'he' (most likely refering to Ginga) has yet to fully awaken. For some reason, every time a Dark Dummy Spark is used, the light on the Dark Spark glows.

After Tomoya switches sides and save Hikaru after their battle, Dark Lugiel sends Tiga Dark to punish him and kill Hikaru. However, even when Tiga Dark grows Alien Valky to assist him, both are still defeated by combined effort of Ginga and Jean-Nine.

Dark Lugiel later sent out Alien Icarus to attack Hikaru's friends, but the new agent also failed. However, Alien Icarus anticipated it its defeat and fought using multiple Spark Dolls and even Ultra Living itself, creating Tyrant to fight Hikaru who had become Ultraman Tiga. However the timely arrival of Jean-Nine ensured his defeat. Afterwards, Dark Lugiel summoned Dark Zagi, and Hikaru transformed into Ginga to fight what was Noa's archenemy, defeating him after a collision of their signature rays. Lugiel later retrieved, Zagi's doll, knowing the Dark Ultra might had a potential to their victory, he would not allow Hikaru to possess such power.

It was revealed in the latest episode that Dark Lugiel had been in possession of Kyoko Shirai's body the entire time. When the first Ginga Shrine was burnt down, the principal grabbed hold of the Dark Spark, unaware of its nature and Dark Lugiel, took advantage of the turbulent emotions in her heart, having been driven to depression by news that the elementary school was to be closed down, took control of her. From time to time he fully seized control to perform his dark deeds. Finally, Hotsuma Raido confronted her and told her of her actions controlled by the darkness, to her great distress. Hotsuma then proceeded to purge Dark Lugiel's essence out of her and after some struggling he managed to force the Dark Spark out of her and make it disappear, seemingly freeing Kyoko of Dark Lugiel.

However Hotsuma's efforts appear to have been for naught, for soon Dark Lugiel managed to revive himself fully, forcing the principal to summon him, and destroyed the school altogether. Hikaru transformed into Ginga to face his archenemy, but was soundly beaten after having his rise interrupted. Just when all seemed to be lost, Taro managed to regain his full size and rose to challenge Dark Lugiel.

Both Dark Lugiel and Taro are evenly matched. However, Taro shields himself from Dark Lugiel's attacks in order to revive Ginga, resulting in Taro being defeated by Dark Lugiel. The villain was shocked to see Ginga revived again. The two then transform their Sparks into an energy lance and took their battle to the moon. At the climax, Dark Lugiel fires the Dark Lugiel Shoot, while Ginga uses his Ginga Especially. Despite the beams being evenly matched, Ginga charges Ginga Especially to full power, overpowering Dark Lugiel and thereby defeating him. After Dark Lugiel was defeated, all of the Spark Dolls are presumed to have returned to their respective universes.

Two years after Lugiel's defeat, Alien Chibull Exceller began to steal Victorium crystals from the Victorians to get Dark Lugiel's body, whose remains were still on the moon after his fight with Ginga. His reason of doing this is so that both the great brain (Exceller) and body (Lugiel) would combine into one powerful force.

Later on, when Exceller was defeated as Five King by Ultraman Ginga and Victory, Lugiel's body had already begun to revive due to the Victorium energies already sent to his body, as signified by his glowing eye.

After he was fully revived, Dark Lugiel's energy core erupted and rocketed to the Earth where it crashed. Lugiel quickly transformed himself into a travel ball and rushed to Earth where he combine with the Live Base. UPG members horrified that Dark Lugiel had combined himself with their base, taking the Victorium Cannon and turning into Vict Lugiel. Both Hikaru and Sho transform into Ginga Strium and Victory respectively. They developed an attack plan by striking the Victorium cannon on Vict. Lugiel's chest and swapped with each other per battle but failed. Later, One Zero faked her betrayal by setting up the Earth's core to release Victorium energies, and reveals her betrayal by setting up the Earth's core to release Victorium energies however, Exceller banished her, Hikaru and Sho from Vict Lugiel when the two Ultra hosts transformed and prepared to battle. Before another beam from Victorium Cannon could be fired by Vict Lugiel, One Zero removed Shepherdon's Spark Doll and quickly return it to Sho/Victory, whom quickly UlTransed it into the Shepherdon Saber to destroy the Victorium Cannon.

Exceller quickly met his demise at the hands of Lugiel when he revealed himself, with Exceller returned to his Spark Doll state. Lugiel regained control over his body and restarted his plan to freeze all lifeforms on Earth in order to create the ultimate paradise. He easily defeated Ginga and Victory, turning them into stone statues. When the surviving humans regained their spirit and the Victorians gave Hikaru and Sho their necklace, they managed to revive the two Ultras so that they could resume fighting Vict Lugiel. One Zero (who was still inside Vict Lugiel) hacked into and weakened Vict Lugiel. Victory used his Sadola Scissors to slam the monster's chest, followed by an combo electric attack from his Eleking Tail and Ginga's Ginga Thunderbolt. One Zero fully weakened the monster and the two Ultras finished Vict Lugiel with the Cosmo Miracle Especially and Victorium Especially, at the cost of the android's life.

A copy of Dark Lugiel know as an Eteldummy (エタルダミー Etarudami) was created by Etelgar. This copy of Dark Lugiel was created from the memories of the citizens’ fear of him, and appears gigantic due to the increasing number of their fears, even larger than an average Ultra. Ultraman Ginga Victory faces him, effortlessly dodge his attacks and finally delivers the Ginga Victory Breaker, killing him in process.

He teamed up with King Joe and Birdon to fight Orb and despite the three of them outnumbering the Ultra, Orb proved to be quite a challenge for the three of them and in Lugiel's case, he kept getting the long end of his sword. Despite being one of the strongest monsters of the group, Vict Lugiel was the first to be taken out by a combination of Orb Burnmite's Stobium Burst and Strong-Corona Zero's Gulnate Buster.

Two Kaiju Capsules, Dark Lugiel and Alien Empera, were in possession of Ultraman Belial before the AIB salvaged them and kept them under tight security, following his presumed death as Chimeraberus. Thanks to a Lecuum information broker, Kei used Arie Ishikari in an arranged hostage situation to reclaim them. As Pedanium Zetton, Kei turned it into a towering monster before Geed finished it and Arie (Belial) reclaim them.

After retrieving the Capsules from Kei, Belial use them to assume Ultraman Belial Atrocious.

"Let's settle this all at once this time, Ginga!"

Resurrected by Ultra Dark-Killer through unknown means, Dark Lugiel is conscripted into the League of Darkness group. He appears on Planet Sundowin to attack a weakened X and Geed. Ginga then intercepts the attack and prepares to battle his nemesis. To buy the three of them some time, X and Geed fire their beams and knock back Dark Lugiel. The three Ultras escape to the Land of Light to regroup.

The League of Darkness reassembles at Ultra Dark-Killer's Dark Palace on Planet Tenebris for the creation of Ultraman Orb Darkness. While appearing unconcerned of Dark-Killer's plans, Lugiel simply joins in for as long as he is able to settle his score with his splintered half. Both rivals clashed with their lances when the New Generation Heroes launched their rescue operation, though Lugiel gains the upper hand. He was killed alongside Etelgar by Ultraman Ginga Victory's Wide Zero Shot, spending his final moments of utter disbelief of the Super Ultraman's strength. Ultra Galaxy Fight: New Generation Heroes

Vict Lugiel (ビクトルギエル Bikuto Rugieru) was a colossal monster which resulted when Dark Lugiel's essence combined with the UPG Live Base (mainly for their Victorium Cannon) and Exceller. As stated, Exceller's agenda for this was to obtain a stronger body so that both his powerful brain and Vict Lugiel's power would cooperate for invasion. However, it eventually backfired on him, as Exceller was destroyed by Dark Lugiel. 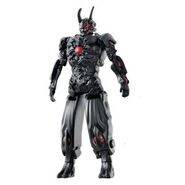 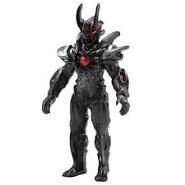 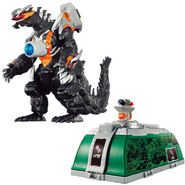 Vict Lugiel and UPG Base 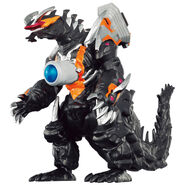