Evil
The Dark Giants (闇の巨人 Yami no Kyojin) were a group that the previous incarnation of Ultraman Tiga led before he became a guardian of light, during the war between the Ancient Giants of Light.

They were members of the Earthbound Ultramen, but unlike them, they were giants of darkness. It was they who caused a civil war that destroyed the Earth Ultramen civilization. However, Tiga turned on them due to falling in love with the original human Yuzare, the leader of the Earth Defense Organization at the time. One by one Tiga absorbed their powers, Darramb's power to give him Power Type, Hudra's speed to give him Sky Type and Camearra's energy manipulation to give him Multi Type and Glitter form. The three dark giants were locked away as stone statues in the ruins of R'lyeh Island where the Ultras once lived. In time, before the cataclysm that destroyed the ancient human civilization, Tiga and the few Ultra survivors left Earth for an unknown star with Tiga and two others leaving replicas of their forms for future generations.

The three waited at the bottom of the sea as R'lyeh Island had became the undersea home of the ancient darkness, but during the dark ruler's rise, the island returned to the surface along with the giants' cell.

Two years after the defeat of Gatanothor, the three Dark Giants' tomb was found in the R'lyeh Island by accident, awakened by mankind after destroying the seal that was holding the Dark Giants in slumber form. As they begin to destroy everything that was in their path, freeing Shibito Zoiger to destroy mankind, the spirit Yuzare appeared from Iruma's body and seal the Dark Giants in a Golden Light Barrier. Then Camearra started to invade Daigo's dream, where she gave him the Black Spark Lens. Soon after that, Daigo confronted the Dark Giants and began to fight them because of his refusal to join them. The first one to fight the hero was Darramb, but because of him underestimated the hero, and was destroyed by Tiga Tornado's Delacium Light Stream. After the battle, Daigo confronted Hudra, as they both battling each other, Tiga could barely keep up his speed with the amazing speed of Hudra. But thanks to the detonate made by Captain Iruma, Tiga was safe from Hudra's attack. But Hudra still didn't give up and fired another shot with a direct hit to Tiga. But the same thing happens to him as the attack didn't affect Tiga as he begin to absorb it and became Tiga Blast. And before Hudra could react to any movement, Tiga fired Ranbalt Light Bullet, destroying Hudra.

As Tiga moved on, he is confronted by the final dark giant, Camearra, who wished to destroy Tiga after losing the hope of Tiga returning to the dark side with her two companions dead. As both of them begin to fight each other, Camearra seems to be gaining upper hand, only to be saved by Rena in her fighter jet. As Camearra was about to destroy Rena in the process, Rena was saved by Tiga. Tiga then absorbed the dark energy and converted it into light which removed all his darkness, turning him back into Ultraman Tiga. But this process only makes Camearra angrier and then she absorbed all darkness and changed into Demonzoa. Tiga was defeated due to his strength was not enough to confront it. But the hope had not given up yet as the remaining light giants gave their final light to Tiga. This process turns Ultraman Tiga into Glitter Tiga. As Demonzoa fires at Tiga, there is no point in harming Tiga as he was covered with light. Then Demonzoa tried to 'eat' Tiga but failed due to the light emerging from Tiga being too powerful. After the battle, the island collapses. Soon after that, Daigo found Camearra, lying in the ground dying, asking him for the light. Soon after that, she died with no Dark Giants left to terrorize Earth anymore. Ultraman Tiga: The Final Odyssey

Hudra
Add a photo to this gallery 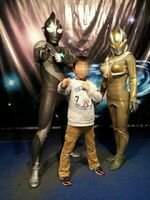 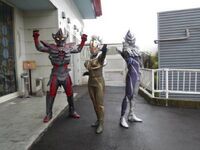 Retrieved from "https://ultra.fandom.com/wiki/Dark_Giants?oldid=510518"
Community content is available under CC-BY-SA unless otherwise noted.