"To be honest, this wasn't what I expected at all. In this darkness, when you're disadvantaged, it's fitting that you're eliminated here!"

Despite the masculine voice, and appearance, Faust is confirmed to be a female Ultra in the magazines.[1][2] Furthermore, she was never called by full name, only referred to as Faust (ファウスト Fausuto) by Himeya and the Night Raiders, including herself.

Dark Faust's name came from the titular protagonist of the German legend Faust, written by Johann Georg Faust. In it the titular character makes a pact with the devil Mephistopheles (Dark Mephisto's namesake); the term, 'Faustian Bargain' is derived from this tale.

"Faust wasn't really designed with her true identity being a woman, but this time it's strange, since I can only see her now as Riko. *chuckles*"

―Hiroyasu Shibuya while commenting on episode 12.

According to producer Hiroyasu Shibuya, Faust's true gender is set to be female from the beginning, but her design was meant not to invoke any feminine traits. He also implied that this was to hide any clues leading to Riko Saida being her host.[1]

During the planning stage, Faust was given two design drafts; the first one was a clown[3] and the second one was a 70's hippie with torn bell-bottom jeans.[4] Her Color Timer is an upside down version of Ultraman Zearth's and gold lines were implemented during the manufacturing of the suit.[4]

A year before the events of Ultraman Nexus, Riko Saida met Kazuki Komon at a zoo and the two hit it off immediately. That night Riko drove home with her mother, father and brother, only to be attacked by the Space Beast Nosferu. The beast disabled their car and though her family was killed when the car exploded from the monster's attack, suddenly a Night Raider, Shinya Mizorogi, appeared and aimed his weapons at the Space Beast. He then turned his weapon on the unsuspecting girl and fired straight into her face. After that she was revived by Mephisto's dark power as a human puppet. Instead, she was a suitable vessel for his servant, the lesser Dark Giant known as Faust. Since then, Riko and Komon started a relationship. All the while, Riko lived in an imagined world that was forced upon her, where her family was still alive and well.

In the present day, the light of Noa found its second vessel, Jun Himeya. As Jun was about to turn into Nexus because of Bugbuzun's reappearance, Faust appeared and started to use dark energy bolts to attack him. Faust claimed she was Jun's shadow, and Jun soon turned into Ultraman Nexus. After going into Junis form, Nexus created his Meta Field. Faust overpowered it with her own Dark Field. In this land of darkness, the two clashed and seemed to be evenly matched until Faust used the Dark Cluster, causing a volley of dark energy balls to rain down on Nexus. Just as the hero got up, his color timer began to blink and Faust began to overpower him. However, Nexus didn't give up and after using the Cross Impulse attack, Faust retreated within the Dark Field, vowing to return.

True to her word, Faust returned as Jun was investigating Lafleya's latest three victims. Wanting the human to turn into Nexus, Faust provoked him until the former complies. The two giants soon fought, but once Night Raiders appeared, Faust vanished. As Nexus fought Lafleya in the Meta Field, Faust appeared from underground and used the dark field once again. The combined effort of Lafleya and Faust seemed to be too much, but after some clever usage of the Phase Feather attack, Faust soon retreated as did Lafleya. However, one of the Phase Feathers deflected by Faust hit the Night Raiders' Chester, knocking it out of the sky.

That morning Komon woke up in the Chester with Nagi missing from her seat. As he went to investigate, he found his girlfriend, Riko, unconscious and holding Nagi's dog tag. Upon Nagi's appearance she tried interrogating Riko, even throwing Komon out of the way, but the frightened woman had no answers for her. That night Lafleya and Nexus fought once again with Faust returning, but after the Night Raiders used the Strike Vanisher to destroy the Space Beast, Faust was heavily damaged and was forced to retreat. Around this time Riko started having visions and hearing voices. She was being tormented by Faust and her master Mizorogi, who erased her memories to turn her into a true puppet.

Faust showed up once again after Riko went missing. Komon encountered the fiend, blocking her path on the road. Dodging his questions about Riko, she was about to kill Komon, but Jun showed up just in time and fought the fiend as Nexus. The two fought once again, but this time Faust didn't use the dark field and was soon defeated. After retreating, Faust was preparing to fight her final battle with Nexus. Komon and Jun found Riko in the forest, but now Faust was in control and revealed the devastating truth about Riko to Komon before transforming. The two giants met once again and clashed in Faust's dark field, with Komon somehow sucked inside with them. By standing over Komon, Faust used him as a hostage to pummel Nexus. With the hero down, Faust latched on to him, to ready to drain him of his Light energy.

As Faust began to drain Nexus' energy, Komon fired a shot at Faust, causing her to stare at him. Unknowingly to him, his shots revived the sealed memories of Riko to the astonishment of Faust's watching master. Because Riko now possessed Faust, the dark giant's host was dead. She released Nexus weakly, while she continuously stared at him. Mephisto summoned Nosferu to kill Komon, but Riko sacrificed Faust's body, which was now her own, giving her life for her beloved. After Nexus blew Nosferu to pieces with the Cross-Ray Schtrom attack, Komon moved to Riko's side, and stayed with her until she died. In his arms, she disappeared into particles of light, leaving behind a devastated Komon to battle with serious depression. Even though Faust was now dead, there would be worse agents of darkness to attack the Earth, such as her master, who would now directly target Komon.

Unlike most Ultras, Faust was only seen transforming once. Her transformation had more in common with Ultraman the Next than Nexus or Mephisto. Faust didn't use a transformation device and instead Riko's body was covered in a dark blue light and transformed, by morphing the image of Riko into Faust.

Dark Faust appears as the first Dark Ultra enemy in Nexus Mode. To obtain her, the player has to defeat Faust in Nexus Mode. Ultraman Nexus (video game) 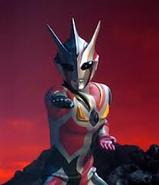 Faust appearing in front of Nexus