Ultraman Max episode 33 "Welcome! To the Earth: Part 1: The Science of the Planet Baltan"

For countless years the Baltan race watched as mankind destroyed their own planet and set course to invade the confines of space. Knowing fully well that the humans could potentially destroy any planet they set foot on, half of the race wanted to exterminate the human populace, while the other called for peace. Infighting broke out between the two factions, with the warmongering Dark Baltans seemingly coming out on top. These Baltans lead a campaign of chaos that eventually lead them toward the Earth itself, but one Tiny Baltan had arrived before.

When Dark Baltan arrived, he attacked the Base Titan and Tokyo, ensnaring the city and the base in an anti-gravity field. When Kaito entered the field, the human summoned Ultraman Max, but even the Earth’s guardian could overpower this murderous invader. When Max proved a worthy challenge for the evil one, Dark Baltan suddenly increased his size, becoming gigantic! As tall as a mountain, the insect-like entity squished Max under his black heel.

The hero struggled on, however. As he pushed the foot off his body, Max gathered his own energy and increased his size also, matching Dark Baltan in size. The largest battle in history quickly commenced, but when Max managed to cut off the fiend’s claws, they simply reattached themselves to its arms! Dark Baltan laughed on as he caught the hero with his energy bind, and soon Max’s energy began to drain.

The red and silver giant managed to escape the bind, cutting his way through the rope-like energy, but his energy was nearly gone. He fired one final shot of his Maxium Cannon, but Dark Baltan effortlessly dodged and appeared behind the hero, blasting him with waves of energy. Max’s body faded away and Dark Baltan’s true attack begun. As the alien rampaged, Team DASH began a new attack against it, launching all three DASH Birds to battle. The three ships buzzed around the invader, blasting it will strands of energy until the creature fired back. Before it could destroy any of the defending ships, Kaito's energy was recharged thanks to the Tiny Baltan and the mortal summoned Ultraman Max again.

Confronting Dark Baltan a second time, this battle would be unlike that of any other. Blocking its energy attacks with a protective barrier, Max formed a twister out of the invader’s power and tore the evil entity to bits. For a brief moment it seemed the battle was over, but it was only just getting started. Each tiny piece reformed into a new Dark Baltan, forming an army of darkness in the sky.

Ultraman Max then followed A new battle began, a battle fought both on land in the air. The two armies clashed as the true Dark Baltan and Ultraman Max continued their battle below. Max launched his Galaxy Cannon, but the invader’s chest opened up, revealing several plates that redirected the attack! Once again it seemed Ultraman Max would be outmatched by this otherworldly foe.

But from the ground, Tiny Baltan and a group of children began to ring an ancient bell from the Baltan world. The bell quickly calmed the invader, forcing the army he had spawned to vanish. The desire for war and conquest began to drain from Dark Baltan’s heart as the bell cleansed his being, making him feel only ashamed of his actions. The battle was over. As Ultraman Max returned to the sky, Dark Baltan was shrunk down into a human by DASH. Together both Dark and Tiny Baltan returned to their home world, allowing the Earth to exist in their absence. 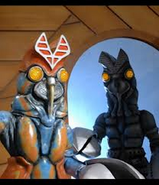 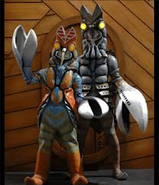 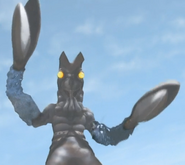 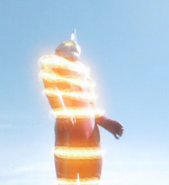 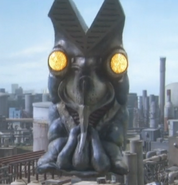 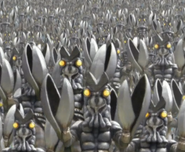 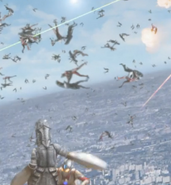 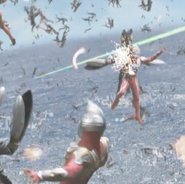 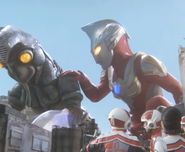