Ultraseven episode 31 "The Devil Who Dwells in a Flower"

Darii (ダリー Darī), also known as Dallie[1] or Dally, was a parasite Kaiju that appeared in the TV series, Ultraseven. He appeared in episode 31.

Darii was a parasitic alien monster that travelled to earth and found refuge inside a flower pedal. When a girl named Kaori sniffed the flower, Darii was sucked into her nostril and from there began to take control of her. As the UG did some research and found out that the microscopic Darii was inside of Kaori, Darii used Kaori's body to sporadically enter a trance-like state in her sleep to search for other humans that share the same blood type as Kaori in order to feed on it. Amagi was one of them, and Darii used Kaori's affection to earn his trust, only for the Ultra Guard to force Kaori into an unconscious state until an antidote could be developed to stop Darii from inside Kaori.

Rather than wait, Dan Moroboshi transformed into Ultraseven and shrunk himself down to a microscopic size and entered Kaori himself through her nostril. Upon entering her body, Ultraseven found Darii cling to a wall of her flesh and sipping on Kaori's blood. Ultraseven tried to stop the parasite quickly with its Emerium Beam, but all it did was release Darii from its host and sent Darii on the offense. After a quick stare down with Ultraseven, Darii reattached itself to Kaori's flesh and coated Ultraseven with a white mist attack, which immobilized Ultraseven and making the battle seem one sided. Fortunately the scientists of the Ultra Guard finished the antidote, and injected into Kaori, severely weakening Darii. With the opportunity, Ultraseven used his Ultra Bubble to melt Darii into a pile of foam. With Darii dead, Kaori was freed from the parasite's control. 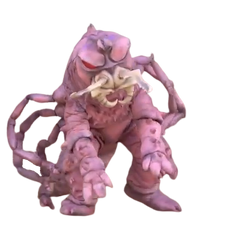 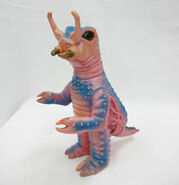 Figure of Darii, by X-Plus. 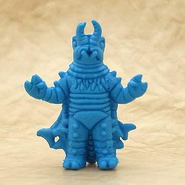 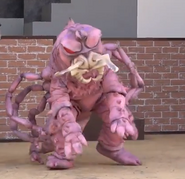 Darii as it appears in the stage show.