Ultraman Ginga episode 2 "A Midsummer Night's Dream"
Darambia (ダランビア Daranbia) is the first of the Kaiju created by Sphere, and is also the first enemy that Ultraman Dyna fought. It was created after the Spheres assimilated with Mars minerals.

Darambia was created when the Spheres began to hail an assault on the TPC Mars Base. Darambia was their main power source and appeared to destroy many wear houses. Super GUTS came to the scene and opened fire on the abomination, but Darambia's barrier shielded all the attacks. Darambia then successfully downed the GUTS Eagle Alpha and stunned the co-pilot Kouda into making him unconscious. SGUTS' newbie Asuka then fired upon Darambia's weakness: his underside. Darambia raged and shot an energy beam at Asuka, missing but flinging the him over a ridge. Suddenly, a flash of light appeared and blasted Darambia into pieces. But eventually, Darambia's pieces reconstituted into a more powerful figure: Neo Darambia (ネオダランビア Neo Daranbia). A New Light: Part 1

Quickly appearing after Ultraman Dyna killed Darambia, it and Dyna fought evenly until it caught Dyna with its arm and began to electrocute and attack him with his energy beam. However, Dyna quickly shook it off and attacked Neo Darambia with his Beam Slicer. But Neo Darambia's barrier quickly jammed the attack. Dyna then destroyed the barrier with his Flash Cycler and right before the barrier reappeared, Dyna unleashed his Solgent Beam and destroyed Neo Darambia easily. A New Light: Part 2

Appearing quickly after Asuka shot down the Sphere that was chasing him, Neo Darambia II (ネオダランビアII Neo Daranbia Tsu) appeared and downed Asuka's GUTS Eagle Alpha-Superior. Ultraman Dyna then appeared and the two began to battle. Dyna put his Flash Cycler to play but was neglected by the beast. The beast then charged towards the giant and bulldozed him. Dyna got back up and completely destroyed the barrier with his Solgent Beam. After that, another Solgent Beam followed and destroyed Neo Darambia II. Final Chapter I: A New Shadow

Thunder Darambia is one of the Dark Spark War competitors where he fights along with other villains. However, during in the middle of the battle, Dark Lugiel, the mastermind itself turns all competitors into Spark Dolls as they fell into the Earth as meteorites and with Thunder Darambia becoming one of Dark Lugiel's collection.

A group of men who Hikaru and Misuzu found littering in a lake fought and soon left, they are then encountered by Alien Valky (in a comedic way as he dances to get there attention) and then takes control of them and gives them a Dark Dummy Spark and a Spark Doll. It soon encounters Black King (Hikaru Raido) and the two fight. Black King is soon swapped out and Ultraman Ginga takes battle and used Ginga Thunderbolt to take out Thunder Darambia and turn him into a Spark Doll and the men only being fried survived.

Later on during Kemur's attack, Hikaru uses Thunder Darambia to fight him. In a comedic fight Kemur farts in his face and shoves a tree in his mouth but trips him with one of the whips. Thunder Darambia is then sprayed with acidic goo and so Hikaru swapped to Ultraman Ginga.

Thunder Darambia became a Spark Doll in the conclusion of the Dark Spark War due to the Dark Spark's powers. His Spark doll was kept in Dark Lugiel's collection, and was given to Alien Valky to give to evil-hearted people, and was Darklived by two trash dumpers.  He fought Black King, and won, but Black King was swapped out for Ultraman Ginga, who beat Thunder Darambia with Ginga Thunderbolt. After Dark Lugiel's defeat, Thunder Darambia's Spark Doll is likely to have reverted back to its original form and depart Earth to return home.

The only Darambia released so far is Thunder Darambia. He was released in 2013 as one of the Ultra Monster 500 series. He has two points of articulation and is very accurate to the show's suit. He stands at 5in tall and is #12 in the series. 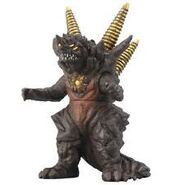 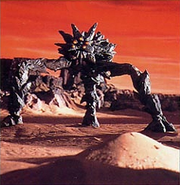 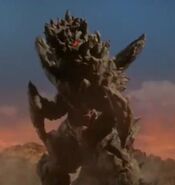 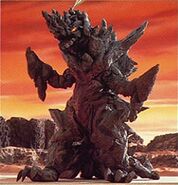 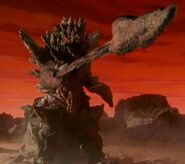 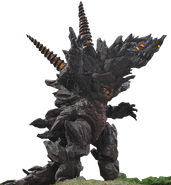 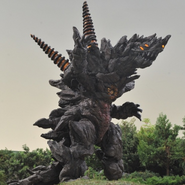