Redman
Dangar (ダンガー Dangā), also known as Dunger[1], is a monster that first appeared in episode 9 of Return of Ultraman.

Dangar was a monster living on a remote island until it had been awoken by MAT. When one of MAT's officers crashed on Dangar's island while delivering a Monster Sonar, MAT came to rescue their friend, but had accidentally disturbed Dangar's sleep while he was in a cave. Awakened, Dangar proceeded to attack MAT and shrug off all their assaults. Hideki Go began attacking, but his craft ran out of fuel and crashed. As Dangar closed in on the crash, Go was transformed into Ultraman Jack to battle Dangar instead. The two fought a lengthy battle until volcanic eruptions surrounded them. Jack finally managed to tear Dangar's dreadlocks off and threw him to the ground before firing the Spacium Beam into Dangar's head, killing him.

Dangar was seen in a animated flashback, being part of the Monster Army lead by Alien Empera. He was seen fighting Father of Ultra along with Zagoras and Gokinezula in episode 25 of Ultraman Taro.

Dangar first appeared in episode 26 of the series, Redman, where fought Sadola, and despite gaining the upper hand at first, Sadola beat him to death with his pincer claws, leaving the victor wide open to an attack from Redman.

Dangar reappeared in episode 29 where he fought Redman after he the hero killed Gokinezula. He grabbed his attention with a sneak attack after Redman let his guard down but, after a good fight, Redman killed Dangar by slashing him with his Red Knife.

Dangar also reappeared in episode 54 where he was at first, downed by Redman before he fought Alien Mysteler in a swordfight and afterwards a close combat fight which ended in a Red Knife to the torso before Dangar regained his strength and fought Redman in a brutal brawl after he knocked away his weapon. After the alien hero downed the monster again, he recovered his Red Arrow and used it to stab the monster in the mouth, killing him before killing the alien. 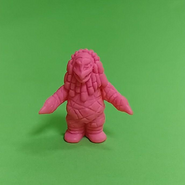 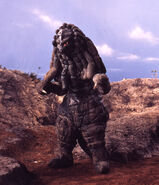 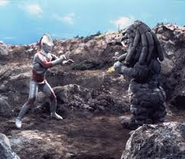 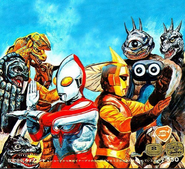