Dancan was an alien foam creature that hailed from an unknown world. Dancan came to Earth with the intent of finding a new home. Dancan, being aggressive towards the UG, used his technology to move an entire city to a forest area. He captured Dan and Soga, but they would later attempt to cease his operations on Earth. Later, Dancan tried to use them as hostage and force the people of Earth to accept his stay on their planet. The UG thus considered him to be a threat and they began searching for his base. Dan, who by now was under Dancan's control, was ordered to transform. Dancan then ordered Ultraseven to attack the Ultra Guard when they came close to finding him. As Furuhashi was still investigating, he came across Dancan and his machines. He attacked Dancan and destroyed the machines. Ultraseven was free, now. Dancan transformed into his alien self. After fighting Ultraseven, Dancan soon realized that he stood little of a chance against him and decided to retreat. Ultraseven chased him until, Dancan sneak attacked Ultraseven. As Dancan tried to run again, Ultraseven shot the Emerium Beam, killing the Kaiju and dissolving it into foam. After Dancan's defeat, the people of the city were no longer under his mind control or turned frozen, thus reversing his effects. The Vanishing City

Dancan was one of the monsters were as part of the Monster Army lead by Alien Empera in the Ultimate Wars. Burn On! The Six Ultra Brothers

Hailing from outer space, Dancan arrived on Earth and marched its way to the city with a stolen missile in its mouth. Haruki in Sevenger was dispatched to capture the monster, who kept Sevenger and Haruki on their toes by running around in circles, forcing the machine to give chase. After Haruki wrenched the missile out of Dancan's mouth, the monster became agitated, and grabbed Sevenger's arm in his jaws. Haruki then had Sevenger calm Dancan down, then began tickling the creature, who found this so amusing that he began firing foam, comedically represented by an aerosol can being shot from just outside the frame. Sevenger promptly ran out of power, but Dancan was captured and put under GAF's observation afterwards.Operation: Dancan Capture!

After being recaptured by STORAGE prior to the series, Dancan was one of the monsters who was absorbed by Ultroid Zero under Celebro's control. His energy and genetic information was harvested by the machine to be used in the creation of Destrudos, with his DNA manifesting as Destrudos's upper legs. The Game to Extinction 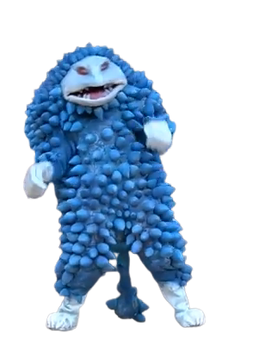 Figure of Dancan, by Marmit. 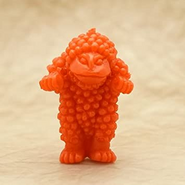 Forming into his true form 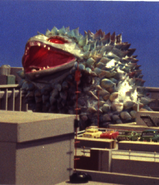 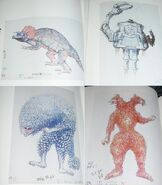 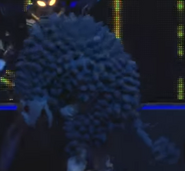