This may not be the article you are looking for. For other characters with similar names, see Moroboshi (disambiguation).

Tomokazu Seki (Motion Comic)
Takuya Eguchi (Anime)
Liam O'Brien (Anime)
"Dan Moroboshi" ( Moroboshi Dan), or Agent No. 340, is the no-nonsense and sometimes direct member of the new SSSP. He is an agent who reports directly to the organization’s leader and the wearer of the Seven Suit.

A long time ago, Dan Moroboshi and his brother Rei were normal alien children whose parents were interstellar diplomats. Their parents were killed by terrorists as a warning, and Rei was kidnapped. Dan could do nothing but hide and watch in terror.

The man known as "Dan Moroboshi" is an alien of unknown origin who had immigrated to Earth years prior. An agent of the SSSP, Moroboshi has been working for the organization for an unknown number of years. He is first introduced during detectives Endo and Kurata's investigation of an impossible murder. He later reports to Ide and Edo as they are watching footage of Shinjiro. Moroboshi voiced his dislike of the young man, and how saw him as "someone who didn't know they were fighting for". Later Moroboshi was leading an extermination team to put down an alien serial killer and called Edo to request permission to proceed. To his annoyance the Zettonian ordered his men to stand down and let Shinjiro put down the criminal. Upon Shinjiro's arrival Moroboshi treated him with blunt callousness and ordered him to fight the alien in an impolite manner. As the battle between Shinjiro and the alien began in the warehouse, outside Moroboshi voiced his doubts in Shinjiro's abilities. When he saw the Spacium Ray punch a hole in the roof and alien escaping, he saw his belief confirmed but was quickly alarmed to see Shinjiro chasing after him. He called Edo, telling him that the pair were heading downtown into public view and was surprised when the alien ordered him to stand down and how it was one of the SSSP's goals to eventually reveal the presence of aliens to mankind. Later on Moroboshi was in a SSSP covert truck pondering Edo's intentions as he was being driven to the scene of Shinjiro's battle. After the battle Moroboshi and his team watched the aftermath from a rooftops with Moroboshi declaring to his team it was time to clean up the mess. Some time after the battle Moroboshi found Shinjiro upset over the fact that he had killed something, something he had never done before in his life. Moroboshi told him that as 'Ultraman' he could not escape the fact that he had to eliminate any enemy that appeared before him. Also he confirmed Shinjiro's off statement of no loner being able to back out as he stated Edo would not allow it. Moroboshi took Shinjiro to a special building, after passing a few security points they came to city that seemed to be inside the building itself. This city was where the alien immigrants on Earth stayed. Moroboshi took Shinjiro to a gambling ring where a boxing match was going on, there Jiro first saw their informant, the only human living in the city: Jack. After the match the two spoke with Jack about their case, the information broker pointed out that it seemed unlikely any of the aliens were responsible for this, save one race and that was unlikely. Moroboshi left Jack and Shinjiro to see the other informants, but they all came to similar conclusions. While reporting to Edo, Moroboshi watched in surprise as Shinjiro flew past him and into a stall, having thrown there by the alien, Red. Moroboshi ended the fight and take Shinjiro back out of the city, where he revealed his disdain in Jiro and his unwillingness to do what he saw was necessary. He also stated that Shinjiro was not the only one who could become Ultraman.

He later accompanied Shinjiro on a mission with an extermination team, when going after a petty criminal crook and killer. Moroboshi had devised that he and his team would be perfect to draw him out and they did, allowing Shinjiro to capture him easily. However to his disappointment, Shinjiro showed the criminal mercy when the alien begged for his life. When he confronted Shinjiro about it later his response was to throw his helmet inches away from his head in anger and annoyance. Moroboshi later listened with Edo and Ide as two policemen attempted to lure the alien serial killer. While Ide and Moroboshi believed they were in over their heads, Edo complimented them on their forethought and ordered Moroboshi to go out. Moroboshi appeared to save the two officers from the alien attacker, forcing the criminal out of the apartment and mocking him by calling him 'alien Hoodlum'. When the attacker asked his name Moroboshi introduced himself as 'Dan Moroboshi' as he equipped his helmet. Moroboshi's suit allowed him to take down the enemy and he returned to base to meet Shin and Shinjiro who had just arrived to answer Ide's call. Some time later he was with Edo and Ide as Shinjiro was lured into a confrontation with Red to force his choice in being Ultraman. He watched the monitors silently in his Ultraman suit and was present with Shin entered the room saying the Ultraman Project would be shut down if Shinjiro would not comply. Fortunately, Shinjiro learned to fly under his own power, passing their test.

Shinjiro met up with Moroboshi while being sortied on their next mission and questioned his violent methods. Their conversation took a tense turn when Moroboshi once more brought up that Shinjiro wasn't the only one who could become Ultraman. Nevertheless, they had to sortie for their next mission, which was at Rena Sayama's concert. Donning their Ultraman suits, the two waited on the roof until their target showed up, fighting Agent Adad while interrupting the concert. Struggling against him, the situation was made even worse when Bemular appeared, challenging Shinjiro, but told him that he was "about to become Ultraman", confusing him even more. When Rena interrupted their battle, Adad took the chance to hold her at knifepoint, prompting Alien Igaru to appear and transform into his true form. Now that his target had appeared, Adad stopped the battle to expose his crimes to the public. Shinjiro wanted to attack them, but Moroboshi stopped him and said that he wants to listen to his explanation while Bemular leaves. The two Ultramen are ordered to take their leave after Adad introduces himself as an agent for the Star Cluster Alliance. In the aftermath, Moroboshi explained Igaru's circumstances on Earth to Shinjiro. Arriving at an empty train station, Shinjiro and Moroboshi encountered a decapitated monster, who had been killed by Seiji Hokuto. He revealed his identity to the two Ultramen and asked to join the SSSP. Moroboshi, Ide and Edo interrogated Seiji but didn't let him join the SSSP yet. Having been caught extorting a man, Shinjiro was sent to deal with Seiji but Moroboshi interrupted their fight, defeating him. Before Seiji left, Moroboshi revealed to Shinjiro that he was not a human and that he would kill anyone if they were marked for extermination.

The SSSP interrogate Yapool, finding the location of the Ace Killer Squad. Shinjiro was told to stay back while Moroboshi sneaked into their mansion hideout using a cloak, and found a storage for bodies with barcodes on them. He realized too late that it was rigged to explode, and was severely injuried Moroboshi. The Ace Killer Squad appears, ambushing them. Ace Killer repeatedly shoots Shinjiro and has Alien Nepenthes bind them to lure out Seiji, who appears shortly. Shinjiro's Ultraman suit is damaged in the process. Seiji is unable to keep up with Ace Killer but manages to free Shinjiro and Moroboshi. After dealing with the henchmen, Moroboshi is escorted off the battlefield by Jack. After the battle, Moroboshi was under care and demanded the upgrades to his suit be accelerated. He started having dreams of his childhood, which made him think he was becoming mentally weak.

After the Star of Darkness make their presence known, Moroboshi goes to New York where they were operating, and learns that his long-lost brother was among them. Moroboshi arrived just in time to deal with the Golden Fortress using his new weapons, single-handedly destroying the giant robot. With the Golden Fortress out of the way, the Ultramen found themselves fighting against the Star of Darkness. Moroboshi went after his "brother" and learned that it was simply his body being used by another person. With no more reason to hesitate, he swiftly decapitated the terrorist to preserve what was left of Rei's dignity. Later on, he sliced in half Rei's kidnapper, a brutish alien Jack and Red were fighting, who was also among the terrorists.

Moroboshi is a cynical and rather insensitive man who presented himself as a blunt and strict senior towards his junior and fellow colleague Shinjiro. A ruthless enforcer, he showed utter lack of hesitation in killing any alien/monster on moment's notice regardless whether the alien/monster in question surrender themselves, which stark contrast to Shinjiro who despises killing and showed mercy to enemies who surrendered, one of facts that sparked a rift between the two.

Prior to their first meeting, Moroboshi had already decided he disliked Shinjiro, denouncing him as a naïve child unaware of the stakes or the purpose of his battles. He also had doubts in Shinjiro's fighting ability as a person as he was annoyed his extermination unit had to stand down to let him take over the battle. When the alien was seemingly escaping, Moroboshi took that as confirmation of his beliefs.

Moroboshi also has a disagreement on what it means to be an 'Ultraman', to him such a being/person must be ready to destroy any alien/monster at a moment's notice, but Shinjiro has problems with killing and has shown that he will not be the merciless enforcer Moroboshi believes he should be, causing a greater strife between them. This disagreement is also shown by his behavior as an Ultraman; whereas Shin and Shinjiro both despised killing and Shinjiro showed mercy to enemies who surrendered, Moroboshi would kill an opponent regardless and make killing the target a priority over fighting them.

It is unknown what Moroboshi's opinion on Shin was, but it was most likely better given the fact that Shin was much older and may have been fighting before Moroboshi joined.

Ultraman Suit Ver. 7 (ウルトラマンスーツ Ver.7 Urutoraman Sūtsu Ver.7), also called the Seven Suit (セブンスーツ Sebun Sūtsu), is a newer model made to be worn by ordinary people, who do not have the Ultraman Factor. Despite it not having any beam weapons, it is compensated for by bladed weapons instead. 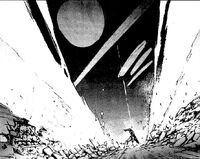 His sword in action
Add a photo to this gallery

Throwing Knives
Add a photo to this gallery

Retrieved from "https://ultra.fandom.com/wiki/Dan_Moroboshi_(ULTRAMAN)?oldid=532725"
Community content is available under CC-BY-SA unless otherwise noted.