Sent by Juda he picked up a fight with Andro Mars, easily pummeling him into submission until Mars turn the tides of the battle and defeated it with Cosmo Bazooka.

At some point in Ultraman Taiga's past, another Dakumiran was one of the many monsters under Imbiza's command. Alongside Zabiden and Bazelia, they were assigned to attack Andro Ares, but all of them fell to Ares' swift counterattack. For Whom Is That Fist For - Part 2 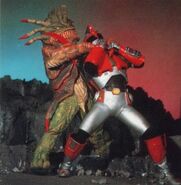