Ultraman Wiki
Register
Don't have an account?
Sign In
Advertisement
in: Protagonists, Heroes, Other Heroes,
and 4 more
English

Naoya Makoto
Daisuke Misaki (岬 大介 Misaki Daisuke), real name spelled Misakey (ミサキー, Misakey), is the human form of Fireman, who is actually a person from the underground civilization of the Aban continent sent to the surface world to protect it from harm. He has an honest and child-friendly personality and a love of justice. While living on the surface he became an archaeologist, and later joined the Earth defense force known as SAF. He transforms using the Fire Stick.

A young 21-year old at the time of the series, Daisuke was well versed in archeology and geology, having worked in those two fields under Dr. Tadokoro. He was actually a descendant of the ancient Aban continent who moved underground to avoid nearby wars, pollution and a meteor strike. They lost the Firestick which could sense magma energy, but Daisuke eventually found it and was able to transform into Fireman using magma energy.

Fire Stick: Daisuke Misaki crosses both of his arms in front of him, while holding the Fire Stick, gathering magma energy, he then holds the Fire Stick to his chest, then raises the it into the air and shouts "Fire!" to transform into Fireman. 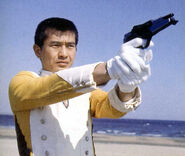