Sandayu Dokumamushi
Daisuke Arashi ( Arashi Daisuke) is one of the Science Patrol's best members and resident sharp-shooter; his favorite weapon, a two-handed rifle called the Spider-Shot.

He is shown to have a tough guy personality, but he is very caring towards his fellow teammates, and has a soft spot for children.

Following the events of Ultraman, Arashi was discharged from SSSP and he now works as a staff in an elderly care facility. Like his colleagues, he went to Muramatsu's residence for their reunion and discussed the truth about Ultraman and his secret identity. After that, he, along with Ide and Fuji, left the residence.

Arashi appeared as a guest character in one episode from Kamen Norider, a Kamen Rider parody segment from a variety show featuring the Tunnels.

Here, he was brainwashed into becoming a minion of Joker (a parody of Shocker) and assisted a weirdly storm-themed kaijin in sabotaging Takeshi Kinashi (a parody of Takeshi Hongo) and his friends. Upon taking orders from Joker, Arashi visited Cafe Amigo. There, he met his former comrade and the owner of the café, Tobei Tachibana (a homage to Muramatsu), while he secretly placed a Joker sticker into Kinashi's back. However, his interaction with Kinashi and his friends with a news broadcast involving heavy rains. When Arashi left the Café, Tachibana became suspicious as there was a Joker card left in the table. Meanwhile, Arashi returned to Joker headquarters informing the group that they were ready to defeat Kamen Norider. Later, he watched Kamen Norider fighting the footmen and the storm-themed kaijin. However, he was interrupted and confronted by Tachibana, now wearing an SSSP uniform, only to be overwhelmed by him. Tachibana broke his brainwashing by simply punching him in his face. Afterwards, the two men were properly reunited and, with the kaijin defeated, they, along with Kinashi and his girlfriend, returned to the café to celebrate their victory.

Like the main characters, Arashi appeared in this manga and his role was the same as his original counterpart. Ultraman THE FIRST 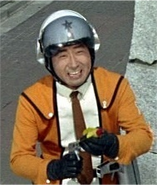