Ultraseven: The Final Chapters episode 4 "The End of the Contract"

None
Dairyuhkai ( Dairyuukai lit. Great Sea Dragon) was a Kaiju that appears in the TV series, Ultraseven: The Final Chapters.

Dairyuhai was the older sister of the younger Otohime. When Urashima Taro washed ashore in the present time and broke his promise with older Otohime, by opening the shell-shaped tamatebako, she died in that moment. Years later the younger Otohime arrived on shore after and pursued him. When Taro, now an old man as a result of breaking his promise, returned to the beach and met the younger Otohime, she berated for what he had done and as a result of that, her sister died. She threw the tamatebako into the sea and from there Dairyuhkai emerged, much to Taro's shock.

Before anything could be done she was attacked by the Ultra Guard, and after defeating them was stopped by Ultraseven who attempted to held her off. Seven then threw his Eye Slugger at Dairyuhai but the monster stopped it by lettint it pierce her hand and threw the blade away. During the battle, Dairyuhlai questioned him why did he protected humans that tended to break promises. Taro later showed up and offered up a moonflower, showing that he had kept his promise, that she absorbed him and relented disappearing in a golden light (tachyon particles). 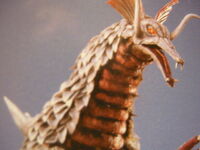