Ultraman Wiki
Register
Don't have an account?
Sign In
Advertisement
in: Articles in need of rewriting, Movie Kaiju, Kaiju,
and 3 more

None
Daigoro's Mother (ダイゴロウの母 Daigorō no Haha) appeared in the co-production film of Toho and Tsuburaya Productions, Daigoro vs. Goliath.

A peaceful monster by nature, Daigoro's Mother was infuriated when her newborn child, Daigoro, went missing. The mother's wrath decended apon a helpless city, as she tore through everything. She could sense her offspring in the imediate area, but before she could reunite with her child, humans destroyed the monster with the latest missles, leaving Daigoro the world's biggest orphan. 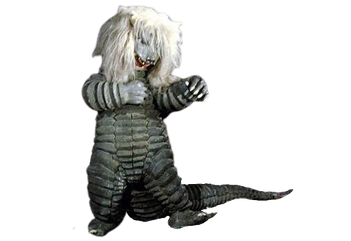 Marusan is the only known company to release a toy of Daigoro's Mother.

Amongst the ruins.
Community content is available under CC-BY-SA unless otherwise noted.
Advertisement