On a stormy night, a mother's anger raged. A massive blue behemoth went to work to destroy the city of Tokyo, but the science of man prevailed and the beast was slain, but sadly, left a small monster as an orphan.

A few years later, Daigoro was raised lovingly by a zoo-keeper and kept on an island and constantly growing! The growth of the baby monster was a concern as it cost money to feed him and he was weak with hunger. But one night, Daigoro didn't seem to be like his normal self, choosing to growl at the sea. A weather controlling beast from space surfaced and pounded Daigoro into submission!

After some training, Daigoro, with the help of humans, defeated the blue invader, Goliath, and was rewarded with massive piles of food. 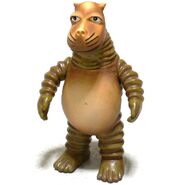 Add a photo to this gallery
Retrieved from "https://ultra.fandom.com/wiki/Daigoro?oldid=428606"
Community content is available under CC-BY-SA unless otherwise noted.