A descendant of Yuzare's race, Daigo was a member of GUTS an elite taskforce, charged with investigating paranormal events and spearheading the defense of mankind.

While flying over a mongolian village with Rena in the GUTS wing, the pair came across Golza rampaging in the village. Distracting it with their attack the pair lured it away from the village but found that captain Megumi was ordering them back to base while another unit would take over. While the two argued against this the point became mute as Golza tunneled away.

Daigo and Rena returned to HQ just as Horri was trying to examine a meteorite. No sooner as Daigo entered the room did the meteor rock disintegrate to reveal a metal capsule. The capsule played a holographic message from Yuzare declaring the prophecy of a time of despair heralded by the monster Golza and Melba. She also said that they needed to find Tiga who had been laid to rest. Daigo was the only one who believed initially, the thought of a super ancient civilization seem preposterous to everyone else, however, when news of Melba's attack on Easter Island reached them, all doubts were gone.

Following what clues they had, the GUTS field team flew to the mountains, while eveyone was skeptic Daigo ran of with a bizzare sense of purpose, leading everyone to the Pyramid of Tiga, an ancient strong hold of ancient technology that relfected everything like a mirror, explaining why their satelite never foun it. Daigo doved of the cliff and into the pyramid to everyone's shock, he phased right into the construct. When they entered from the ground the group found Daigo standing in front three massive statues. Daigo's DNA told him these things were important but he didn't know how or why. He also didn't have time to figure out.

Iruma called them and told them Melba and Golza where on their way, GUTS attempts at stopping them were useless against the ancient beasts. GUTS evacuated as the monsters reached their destination, the structures ancient defenses fell agains their evolved might. Daigo took to a GUTS wing and tried to protect the statues but was felled by the beasts, his plane crashing and burning. Instead of the afterlife, he found himself in a realm between the waking world and the hereafter, with Yuzare explaining to him the situation as Tiga and his companions looked at him.

Accepting his destiny Daigo was returned to the world of the living by Tiga in a ball of light that sped from his crashed plane and fixed itself within the last standing statue:Tiga's. The two merged and through Daigo Tiga was manifested in the real world, breaking free of his stone confines to challenge the two ancient beasts. As Tiga Daigo demonstrated the Ultra's great power but the duo eventually tag-teamed him and held him a lock, Melba holding his feet up high, and Golza crunching down on his head.

Daigo panicked, but he suddenly found himself in front Tiga's companions again, they explained to Daigo Tiga's ability to alter his body and teaching him the manuerver to activate this change. With this new skill Daigo turned into Power Mode to free himself and dish out devastating blows to the two monsters. While Golza escape, Daigo caught Melba in Speed Mode. At Munakata's advice Diago ended the destructive flying beast before leaving and changing back. Surprising his friends with his survival the team left to return to base, along the was he found the Sparklence and Yuzare's voice explained it importance. Daigo could only ponder what other threats he would face in the future. 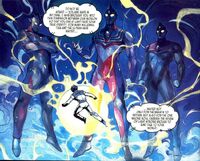 Retrieved from "https://ultra.fandom.com/wiki/Daigo_Madoka_(Dark_Horse_Manga)?oldid=534479"
Community content is available under CC-BY-SA unless otherwise noted.