Ultraman Dyna episode 39 "The Light and Shadow of the Youthful"
Daigerun (ダイゲルン, Daigerun), also known as Daigelun, is a carnivorous Kaiju from the series Ultraman Dyna. He appeared in episodes 4 and 39.

Daigerun was originally an underground monster that burrowed around many areas in order to eat cattle. However, due to Geofrontier LLC's new super oscillatory beam that was created for the construction of underground cities, Daigerun was annoyed and infuriated by the pulse of the beams and thus began to circle the city where the beams were at work. After Super GUTS discovered the beast and his relationship to the beam, captain Hibiki dispatched Kouda and Asuka to shut down the beams while he himself talked to the manager of Geofrontier. However, the manager was furious when Hibiki asked him to shut down the beams. He then proceeded to order the policemen to capture Kouda and Asuka then turned the beams on max frequency. Daigerun was infuriated by the attempt and assaulted the Geofrontier workarea by burrowing like a shark and emerging near the ring. He then surfaced and attacked the beam generators. Kouda began to evacuate the employees, but Asuka, the manager, and a secretary was trapped underground. Super GUTS began their assault, but could not do much damage due to their attacks being vaporized by Daigerun's flames. Soon, Asuka transformed into Ultraman Dyna to battle the menace. Although at first Daigerun and Dyna fought to a standstill, Daigerun immediately gained the upper hand when he began to use his head to ram the hero. Dyna fought back with a barrage of kicks, but suddenly, Daigerun bit Dyna's foot and began to lift him into the air, then drop him onto the ground without loosening his grip. Dyna finally transformed into Strong Type for the first time and rammed his free foot down on Daigerun's skull, crushing it. Daigerun lost his grip, and Dyna proceeded to give him a Strong Punch that crushed his skull again! Soon Daigerun unleashed his flame on his hero, only to have it knocked back to him by Dyna's Ultra Barrier. Finally, Daigerun was defeated by Dyna's Vulcan Swing.

Clone Daigerun (クローンダイゲルン Kurōndaigerun) was a clone created by the past-helper of the the dead Dr. Ohtomo, Hiroyuki Yamazaki, to wreak havoc. One day, Clone Daigerun appeared on the streets to attack the Geofrontier LLC again. Super GUTS was dispatched to fight the clone, but still could not do damage due to Clone Daigerun's flames. However, TPC's newest craft: GUTS Shadow, appeared after being invisible for some time. The pilot of the craft swiftly used its energy net to hold Daigerun in place while another GUTS Shadow, also having been invisible and mute, appeared and used its Spigun on the beast. Soon, the clone exploded.

Daigerun was only released twice (by far) by Bandai in their Ultra Monster Series. The first time of the creature's release was in the 1998 Ultra Monster series. Although it was just called Daigerun, it had a color pattern strikingly similar to that of Clone Daigerun, who had sprays of white on a black body. The last Daigerun made (2000) used the same mold but had yellow paint marks whereas the original had white, thus becoming more similar to the original Daigerun. Daigerun (both) features articulation in the arms and legs, with a glue-sealed tail. He is number 108 in the 1998 series and 55 in the 2000 series. 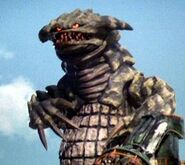 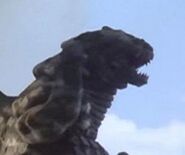 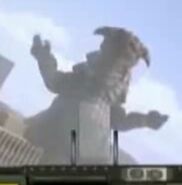 Daigerun in a promotional magazine
Community content is available under CC-BY-SA unless otherwise noted.
Advertisement