Another one of Yapool's insane creations, Daidarahoshi is a choju who can travel through time. He also intends to destroy a certain statue. He appeared in a nearby forest and began wreaking havoc, and TAC was quick to respond. TAC opened fire on Daidarahoshi, attacking him from all sides, but Daidarahoshi simply shrugged of every assault TAC threw at him. Hokuto transformed into Ultraman Ace and began fighting Daidarahoshi. At first, Ace gained the upper hand, by beating down the Choju. After beating up the super beast, Ultraman Ace tore two trees from the ground and gave one to Daidarahoshi. With the trees, the two began to imitate a swords battle. In the middle of the "sword duel" Ace "cut" the super beast, apparently killing it. However Daidarahoshi was just faking his death and managed to knock Ace down. Daidarahoshi gained the upper hand by beating Ace senseless. However, Ace managed to knock Daidarahoshi off and then used the Metallium Ray to blow the choju to bits in a fiery display. 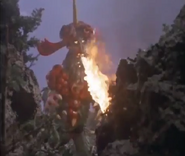 Extraordinary Jumper
Add a photo to this gallery

Figure of Daidarahoshi, by Marmit.
Add a photo to this gallery

Retrieved from "https://ultra.fandom.com/wiki/Daidarahoshi?oldid=419430"
Community content is available under CC-BY-SA unless otherwise noted.