Earth (The World Where The Ultra Flare Occurred)

Kensuke Takahashi
Daichi Oozora[1] (大空 大地 Ōzora Daichi) is the human host of Ultraman X and a member of Xio. Despite the fact that Xio's main priority and mission is to destroy monster threats, Daichi wants to have peace with monsters, preferring to co-exist with them rather destroying them.

By combining these, it means that Daichi's full name represented him as the Planet Earth.

As a child, Daichi's father and mother were lost in a mysterious event connected to the Ultra Flare. His father had ran into a building to find his mother, but the building and everything in it disappeared. Daichi was left with the Gomora Doll his father was studying and had a vision of a battle near the sun, between two spheres. He saw the defeated sphere thrown into the sun and the victorious opened by the solar flare, revealing a giant of light.

Fifteen years later, Daichi became a scientist to find his missing parents and was then recruited into Xio and placed into the lab team, researching in the creation Cyber Kaiju. He contributed his Gomora Spark Doll to the creation of Cyber Gomora but during a test run to materialize it, the process failed after the electro particles used to create it only reached 67%. When Demaaga attacked and Daichi and Asuna had finished evacuated the citizens, Daichi tried to retrieve his fallen Gomora doll, becoming an open target to Demaaga but was saved by Ultraman X, as he combined with Daichi and he became the host of Ultraman X. After defeating Demaaga, Daichi and Ultraman X joined forces with each other in order to fight against more monster and alien threats. A Voice From the Starry Sky

After sealing Grimdo, the New Generation Heroes lost their ability to transform, and went to Taiga's Earth to protect Hiroyuki Kudo. Daichi first appeared to help Pirika Asahikawa, who had been hacked by a virus. Soon, Grimdo landed on Earth, and fought against Ultraman Rosso, Ultraman Blu and Ultraman Taiga. However, they were no match for the beast and were about to be defeated until Ultraman Taro arrived to rescue his son. Soon, Taro fell for Tregear's trap and was possessed by Grimdo after executing the Ultra Dynamite on it. Now under the monster's control, Taro assaulted the three Ultras and forced them to revert.

After Katsumi Minato, Isami Minato and Hiroyuki confronted Kirisaki, Daichi received the X-let from Hiroyuki, restoring his X Devizer. The New Generation Heroes transformed to fight against Tregear, Taro, and a monster army revived from their Rings. They power-up to their strongest forms in response to Grimdo granting the monsters some of its power, and manage to defeat their opponents. Afterwards, Tregear offered himself to Grimdo, who had been released from Taro's body. This caused Grimdo to swallow him and grow to giant size, and regain its full power. The New Generation Heroes consecutively use their finishers against Grimdo, but to no effect. Just was they were about to be blasted by Grimdo, Taro protected the New Generation Heroes with a barrier and told them to pour their energy into Taiga's Ultra Horns. Upon doing so, Hiroyuki received the New Generation Eye and transformed into Ultraman Reiga, and defeated Grimdo.

With the battle over, the New Generation Heroes gave some parting words to Hiroyuki before leaving for their home worlds. Ultraman Taiga The Movie: New Generation Climax

Daichi places his hand on top of the X Devizer, manifesting Ultraman X's Spark Doll and scans it. Daichi than raises the item in the air and shouts "X!".

Beta Spark
Add a photo to this gallery

Daichi and the SSP

Daichi Oozora and Gai Kurenai
Add a photo to this gallery 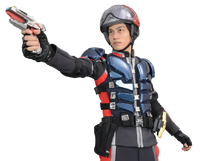 Retrieved from "https://ultra.fandom.com/wiki/Daichi_Oozora?oldid=534477"
Community content is available under CC-BY-SA unless otherwise noted.