"I'm thinking I'll kill my homeroom teacher! To run into someone and not apologize? So rude!"

SSSS.GRIDMAN episode 11 "Decisive Battle"
Dévadadan (デバダダン Debadadan)[1] is a Kaiju that debuted in SSSS.GRIDMAN. It was created by Akane Shinjo to kill her homeroom teacher.

Akane decided to unleash Dévadadan with Alexis's help after her homeroom teacher bumped into her at school and did not apologize. Using the Instance Abreaction on Dévadadan's figure, it was turned into a real monster that proceeded to hunt down the teacher and attempt to destroy him. Gridman appeared to combat the threat but its laser counter ability nullified the Grid Beam. After Samurai・Calibur became the Gridman Calibur, the monster was destroyed by the Grid Calibur End finisher. With the teacher surviving the ordeal to the next day, Dévadadan failed its mission. Ironically, the incident had taught said teacher to reduce his smartphone addiction, evidenced by his apology to Yuta by the next day. Restoration 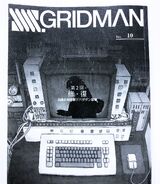