Fusing selected Cyber Kaiju with the user, turning into their arsenals

In use
Cyber Armor (サイバーアーマー Saibā Āmā) are armors that Ultraman X can wear when his host Daichi Oozora scans a Cyber Card into the X Devizer. Armors based off Ultra Kaiju are alternatively called MonsArmor (モンスアーマー Monsuāmā). Ultraman Orb can also use MonsArmors via X's power through Orb Trinity.

Created by Alien Fanton Gourman, the Cyber Armors were first utilized by Daichi/X during their battle with Birdon. In its debut, Cyber Gomora was used activating Gomora Armor as they turn the tides of the battle and defeated Birdon. Following this, several Cyber Cards would be reprogrammed to arm X with different armors. A Collection of Possibilities

In episode 5, Dr. Gourman invented the Ultraman Zero Armor, a replica of Zero's Ultimate Aegis utilized by X to travel across dimensions. Since this process only armed X with a new weapon as opposed to fusing him with a monster, this type of armor was coined Cyber Armor (サイバーアーマー Saibā Āmā).

The second known Cyber Armor is the Beta Spark Armor, which used in conjunction with the Beta Spark. This armor covers not only the upper body, but also the legs as well. Unlike any other MonsArmors, this one represents two figures, Ultraman and Ultraman Tiga, and is the heaviest of all, weighing 19,000 t. 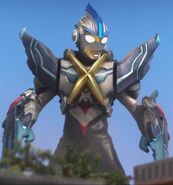 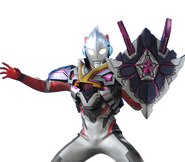 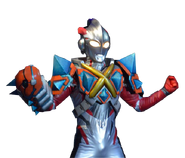 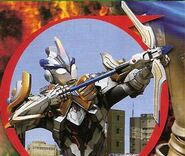