"The Universe was almost destroyed once. The one who saved it was an old guy named Ultraman King. The Universe was like your body, on the verge of death. We Ultramen can fuse our bodies with someone to heal them. But the whole Universe... It was just too big. It wasn't destroyed, but Old Man King is now dispersed throughout the entire cosmos. You can call out to him, but there's no response."

―Zero as he recounted the events of Crisis Impact.

Belial triggers a chain reaction that would destroy the entire universe.
Ultraman King restores the universe, but became unconscious afterwards. Everything is restored after Belial's death at the hands of Geed.

Multiple untold casualties.
The Crisis Impact (クライシス・インパクト Kuraishisu Inpakuto) was an apocalyptic incident that happened nineteen years before the start of Ultraman Geed.

After Belial defeats Zero during the Omega Armageddon, Belial detonated the Super-dimensional Eradication Bomb with his Giga Battlenizer, destroying Earth in the process. The great explosion created a black hole that consumed the entire universe. At the verge of getting destroyed, Ultraman King arrived and reversed the damage caused by Belial earlier on. King merged with the universe ever since but was left unresponsive. What happened to Belial and the Ultra Warriors were unknown but this event was remembered by the people of revived Planet Earth and was called the Crisis Impact.

Absent from Earth for many years, the Ultra Warriors became a popular legend, with records of their existence being mysteriously lost and the memories of them slowly fading from the collective consciousness of humanity. It is also known that many of Earth's inhabitants were led to believe Crisis Impact as a meteor shower until a recent discovery of Belial's caricature within an unearthed record.

Other races across the universe appeared to have knowledge of Crisis Impact despite the efforts of Ultraman King. In hopes of restoring the order that Belial destroyed, aliens of multiple races had founded AIB and station themselves on Earth. Kuruto, an Alien Shadow, revealed that his kind had started to explore the universe in search of a replacement planet, as the damage that Planet Shadow suffered during Crisis Impact terrified the Alien Shadow, who feared that the event would happen again.

Despite humanity largely forgetting about them, the Ultras had also survived the destruction and reconstruction of the Universe. On the Land of Light, Hikari's Ultra Capsules were stolen, forcing Zero to visit Earth and investigate the matters. Meanwhile, on Earth, another Ultraman had been already living on the planet for several years. Unaware of his actual self, the disguised Ultra would soon become the Earth's latest defender.

After the death of Belial by the hands of Geed, the wounds of the universe caused by the Crisis Impact had healed and Ultraman King's body has been restored as well.

The Ultra Warriors rendered helpless as they can only witness the explosion. 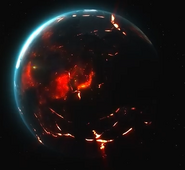 The earth is destroyed.

King using his powers to merge with the universe.

King begins to reverse the destruction of Earth using his powers.

Crisis Impact ends with the Earth being fully restored.