Iron King episode 26 "The Great Tokyo War"
Cricetton (クリケットン Kuriketton) is a Titanian that first appeared in episode 25 of Iron King. He is Titanian Operative No. 7. Like all the other Titanians, he wears a black hat, a red cloak and a white mask. In his giant form he is an insect monster.

The seventh Titanian operative, Cricketton was the ultimate bug warrior. Attacking with a host of strange and unusual powers, the creature sought to kill Goro and Gentaro once and for all. Goro quickly transformed into Iron King and battled the insectoid behemoth, but its many claws quickly incapacitated him. Thankfully, Gentaro managed to come to his aid and helped the hero get free via his Iron Belt. Gaining distance between the warring forces, Iron King uses his telekinesis to throw the insect away. Wounded, the great bug monster fled and conceived a new plan to possess either Gentaro or Goro!

After possessing Goro, the invaders began a new assault on Tokyo. Cricketton demolished everything in its path, but as flames spread wide and far, Goro called upon Iron King! However, the relieved heroes suddenly watched on in horror as Iron King, also under control of the invaders, began to wreck havoc on the city! Nothing in the self-defense force’s arsenal could standup to their combined assault. However, the Titanians summoned back their prized monster and watched on in glee as the hero killed those he once protected.

Using his Iron Belt, Gentaro fought hard against Iron King and caused him to run out of water. Realizing who Iron King’s human identity was, they began preparations to separate the machine from the man. In the midst of the experiment, the Titanians dispatched Cricketton again. It began a new assault and attacked a power plant, surging countless volts into the laboratory. In an ironic twist of fate, the Titanians freed Goro of his slavery to them! Transforming, Goro vowed vengeance against the strange insect monster! The two battled, but Iron King was now supercharged thanks to the influx of power. With an explosive flash, the last of the Titanian space bugs was completely destroyed in a colossal blast. 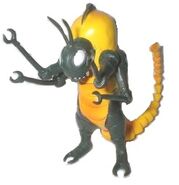