Slice through most conventional matter

A Crest Weapon is, as its name implies, the crest of an Ultra used as a weapon. The most famous of these weapons is Ultraseven's Eye Slugger, which is a boomerang-like weapon that can be controlled by Ultraseven in flight. It serves as a head crest when not in use, and is the first of several detachable Crest Weapons used by later Ultras.

Each can slice a normal enemy in half, although a few robotic enemies have proven able to resist the Eye Slugger and similar weapons thanks to the strength of the metal used to build them. The most well-known of these is King Joe. 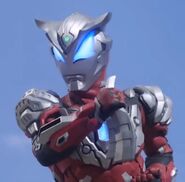 Ultraman Blu wielding the R/B Slugger Blu
Add a photo to this gallery
Retrieved from "https://ultra.fandom.com/wiki/Crest_Weapons?oldid=441026"
Community content is available under CC-BY-SA unless otherwise noted.