Crabgan was a crayfish life-form who lived in the Cambrian period that grew to large sizes for the course over 500 million years. Much like Anemos, Crabgan's race went extinct long ago and during that time, Crabgan had formed a symbiotic relationship with Anemos, making their reunion Crabgan's highest priority. As the large Anemos monster was being attacked by the X.I.G fighters, Crabgan heard its cries and arrived through the clouds of smoke and fire, extinguishing them before they could harm Anemos. The X.I.G fighters could only watch as the two drew nearer to one another, and fused to become one powerful being: Crabgan & Anemos.

Once Crabgan and Anemos fused they began to zombify XIG members and the KCB news crews for a meal. Gamu seeing the harmful intentions of the beast rejected by Earth tried to convince Mike that it was a natural enemy to humanity, but to no avail. Miku tried to make some sense into the creature knowing Anemos was in there, but Crabgan & Anemos zombified her and was about to eat her. Gamu could take no more as he turned into Ultraman Gaia, saved Miku, and began to fight Crabgan & Anemos. Gaia seemed to have the upper hand until Crabgan & Anemos reversed his body and began to mercilessly attack. However, Gaia didn't give up so easily as he quickly used the Quantum Stream to separate the two creatures and blew them to pieces with the Photon Edge shortly afterwards. 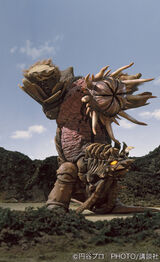 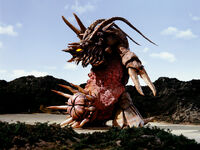 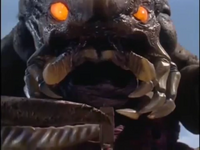 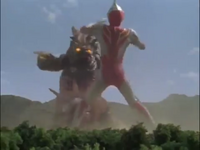 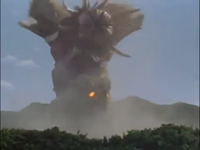